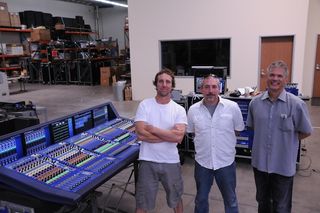 "Humans should not be allowed to have this much fun." Paul Freudenberg was sitting at his desk in Rat Sound's Camarillo, California headquarters, and found much appeal in his new surroundings: "The mantra here at Rat Sound is really one of fostering an environment where people can be professionals at what they do, but also have fun and extract enjoyment out of working really hard."

Having recently taken on the role of general manager for one of the industry's most progressive and culturally charismatic companies, Freudenberg sees a lot of opportunity in Rat Sound's touring, installation, retail, and manufacturing operations. All of these are familiar territory for the man who most recently served as business development manager and K1 sales specialist for L-Acoustics in the Americas, and previously held marketing and product specialist roles for BSS Audio, AKG, and Aphex over a 25-year career.

"If I were to summarize what really drew me to this job, it was the fact that there's such a variety of work being done here, and there are just so many aspects of my skill set and my pro audio career that are covered," Freudenberg said. "There's product development, integration of technology, retail sales, distribution, and concert touring. Plus the fact that is it is a really creative and pleasant work environment is what just made it impossible for me to say no. I feel very fortunate."

Known primarily as a touring company led by its dynamic namesake Dave Rat, Rat Sound has been able to apply its road sense to many facets of the audio industry. Its retail division has a cult following, and its SoundTools line of products is taking off with platforms that easily expand from one niche to another. Meanwhile, on the AV side, Rat Sound's installation division was founded in audio expertise, but under the direction of David Myers has expanded to include a full complement of control system programming and video technologies for houses of worship, theaters, conference rooms, music venues, clubs, and performing arts centers.

The common thread across all things Rat Sound is innovation borne of experience. Some tangible results of this ethos are the "why didn't I ever think of that" gizmos that are released under the SoundTools moniker. Often originating in the mind of the ever-analyzing Dave Rat, many SoundTools "come out of 'Hey I just worked on a job, and this tool would have really gotten me out of a bind if only I was to have it,'" Freudenberg described. "Then once we have developed the technology, we want to refine it and figure out how we can put that technology into other devices."

One of the first SoundTools products, the Rat Sniffer cable checker, is a good example of this progression. "The simplest sort of currency on any audio campus is the XLR connector," Freudenberg began, "and with the Rat Sniffer, the concept was that all other cable testers required you to have both ends in one place in order for you to test the continuity through the cable. And the Rat Sniffer is one of the only testers that allows you to have the cable laid out. You put the sender on one side and the sniffer on the other and you test it while it's laid out in the field. That field can be a recording studio, live sound stage, or an installation. It's an essential tool everyone should have one in their tool bag." The next step is to expand that concept to other fields. Up next is a RJ-45 tester using the same principles, with DMX and potentially others to follow.

The "tools made by professionals, for professionals" formula works on a larger scale, too. Rat Sound, which five years ago developed the MicroWedge monitor with EAW, recently completed another collaborative project with the manufacturer, whereby the Anya system was launched. "There is a tremendous amount of potential that this technology has to offer," Freudenberg noted. "EAW has really tried to do a unique product from the ground up, rather than an also-ran. They really have done a fantastic job of the integration of the technology that is quite impressive, and now adapting that technology to our user base and markets is going to be the next phase of the introduction of that product."

That said, it only takes a simple math equation to ask the next question. Will Rat Sound be developing speakers of its own? "There's not a day that goes by when we don't think about making something," Freudenberg declared. "Of course speakers is where it all started, and so we're always looking for a special niche, or a special application, or some part of the market that's unfulfilled. Let's say there's just the right apex where technology meets need and application. So yes, I would say that yes, sound is where it's at, we love sound, we love making sound, we have an extensive 'dream list.' Deciding what to do first is the most difficult decision.

At this point in the Rat Sound arc, with so many burgeoning successes taking off at once, Freudenberg will lead the ground operations of a constantly roving company. It's a good thing Rat Sound frequently holds its "board meetings" in communion with the waves. Now Freudenberg, a Southern California native, is finally getting his surf on.

"The ocean has always been out there for me, and there was always something beckoning," he said. Now, with all his industry experience in tow, Freudenberg is paddling out to catch the next wave with Rat Sound.