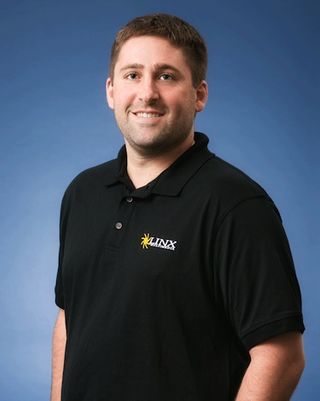 Extracurriculars: Some of Pollard’s favorite places to hike in Colorado include Pike National Forest and Poudre Canyon in Fort Collins. He’s working on getting his two young sons tied into the hobby. Pollard is closing in on fundraising goals for a German study-abroad scholarship program he has co-founded in memoriam of his best friend.

Why You Need to Know Him: This one-time aspiring biologist walked onto his first AV jobsite as “the lowliest of lowly, green techs you could be,” for what he expected to be a temporary job. Four-and-a-half years later, he’s the engineering manager, heading up two formerly separate engineering teams that he brought under one umbrella.

How It All Began: It helped that that first jobsite was a cool performing arts center, complete with flown speakers in a big auditorium, a big audio system with an intercom going from stage to control booth, and all sorts of racks—all quite impressionable to a young AV technician. Another one of Pollard’s first few jobs was for a crime lab. There was a big presentation space for people to gather, stadium seating, large projection screens, side displays, a large digital media system implemented. “I was like, ‘Man, this stuff’s just really cool,’” he recalled. “The way that different people use [the technology], and how it helps other people’s jobs was really interesting to me. I’m helping people do their jobs and become more efficient, and I thought that was an interesting aspect to the audiovisual world as well—one that people overlook sometimes.”

At that point, a position as an estimator at Linx opened up. Some more technical learning progressed, and he began working toward his CTS. At a growing company, it was easy to continue climbing the ladder up to estimating manager. “I just wanted to lead the team, to improve the system that we had and become more efficient.”

The rest of his quick ascension rested on a keen eye for observation. Linx had two very separate engineering teams: the first for designing and estimating bids, and then project engineers that got the hand-off once a bid was awarded. Everything was basically being double engineered, and the inefficiency was perplexing. Heading up the estimators, Pollard worked with and was mentored by project engineering manager, Johnny Farensena. The two had initial discussions about how to bring the two teams a bit closer when Farensena left the company, leaving a void. Pollard went to his boss, Travis Deatherage, president of Linx, to discuss what it would mean to bring those two teams closer together, pairing engineers on both ends of a project for more efficient hand-offs. The discussion soon turned into Pollard becoming the engineering manager of both.

Coming up on a year in the position, “I would say it’s been a success in terms of the teams are working well together, that we’ve improved our efficiency, that the team has grown [from seven to 10],” he assessed, modestly noting that there’s always room for improvement.

Some of Pollard’s favorite places to hike in Colorado include Pike National Forest and Poudre Canyon in Fort Collins. He’s working on getting his two young sons tied into the hobby. How He Plans to Attract More Young People to AV: As a young person who had no knowledge the AV industry existed until he started at Linx, Pollard is keen on helping to close the generational gap. He envisions mining for talent with software and electrical engineering type of backgrounds. Better education options at the college level focused on audiovisual technology would be a good start, but also, “use the cool factor that we have have, and get people interested before they’re off and looking at the Boeings and the Teslas and the Googles of the world,” he said. “I’m not saying that we’re like any of those, but those are all the aspirations for all these young engineers. Ninety percent of them aren’t going to end up at any of those companies, and they have to end up somewhere.”

Pollard and another young colleague of his, Tim Hoskins, launched a new internship program at Linx this summer. Two engineering students were recruited and are helping with CAD, modeling with SketchUp and Revit; they’re being exposed to some jobsites and the fabrication spaces, for rack assembly and equipment test out. They’re being paid hourly and provided a monthly stipend to offset living costs. Not only are the interns getting exposure to the AV industry, but Linx has already gotten exposure from some of their friends interested in opportunities at the company now too.