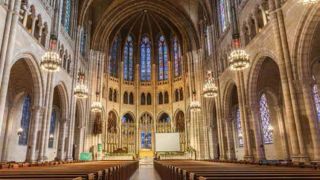 Opened in 1930, Riverside Church in the City of New York, is an evocation of a thirteenth century French Gothic style cathedral; its reputation both traditional and radical, inclusive and affirming. A staunch advocate for social justice and the Civil Rights Movement, Rev. Dr. Martin Luther King Jr. and Nelson Mandela have spoken there, and it hosted the funeral service for Jackie Robinson. Not only does Riverside possess the tallest church spire in the United States at 392 feet, it has the highest of reputations.

In 2016, Riverside completed the installation of an extensive 10-gigabit fiber network. Twelve months later, it has completely refreshed its sound reinforcement system within its 300-foot-long nave.

In 2016, Riverside completed the installation of an extensive 10-gigabit fiber network. Twelve months later, it has completely refreshed its sound reinforcement system within its 300-foot-long nave.

This was no small undertaking. The new fiber network was a long-term project, developed and designed by the church’s resident director of IT and technical services, Darvin Darling, and consultants Acoustic Distinctions (AD). Primarily for audio and some video signal transport, its implementation has been profound, greatly improving the audio platform, and leading to a complete reappraisal of the sound reinforcement system.

David Kahn of AD provides the backstory. “When the church first contracted us in 1993 they were looking for our assistance in upgrading their audio systems. Our approach was to ask the church what their overall vision as a ministry was, and how the sanctuary helped to fulfill that vision. We learned that while they were not fully satisfied with the quality of the reinforced spoken word, they were even less satisfied with the nave’s natural acoustics, specifically its poor support of their traditional music program, and its poor support of congregational participation in worship.

“When the church was originally constructed, sound-absorbing tile was used to improve speech intelligibility. We helped the church first seal the tile to improve acoustical support of their music program and congregational singing. As soon as this project was complete, it became more necessary to upgrade the sound reinforcement system, as the more reverberant and responsive acoustics of the nave further degraded speech intelligibility.

“A growing acceptance of visible loudspeakers in the nave allowed us to implement a solution utilizing loudspeakers mounted on the columns, rather than trying to design custom loudspeakers to replace the existing ones that were hidden inside the lighting fixtures that hang over the aisles.”

To address intelligibility issues in the nave, Specialized Audio Visual Inc. installed a system of d&b audiotechnik speakers consisting of cascading pairs of 24C-E columns on the pillars with d&b 5S loudspeakers to fill in the edge aisles.

Darling picks up the story. “From the onset of the project there were two outstanding issues to be addressed—inevitably, they overlapped. We looked at our core audio infrastructure; one of our goals was to reduce the number of copper runs that send signal back and forth, including for our broadcast output. We do a live mix to broadcast (over internet) and a recorded mix for later use on radio, and to distribute to older parishioners. So, when I arrived at Riverside in 2010, I inherited a copper split system where some of the runs were 1,000 feet long, some were old and degraded, some just didn’t work, and generally they produced artifacts of static that affected what we produced. A method was required for clean signal passage, that much was clear, and one that overcame the limitations of distance.”

Just to put that into context, since 1930 Riverside has grown to include a separate west wing (added in 1956) that among other functions, once housed the WRVR radio studio. Elsewhere, several chapels and a theater provide spaces for other important church functions, all requiring audio in some form.

“With the advice and guidance of AD we went for 10-gigabit fiber,” Darling continued, “based on the Nexus system from Stage Tec with Stage Tec analog to digital converters. This is a high-end product and has very good mic preamps for the Schoeps microphones we had purchased. We also implemented multiple splits in/out in key parts of the building. In combination with Dante, we could also add sends to all the other more remote or less used parts of the building simply by plugging in a network cable.

“The fiber and network infrastructure project was completed in 2016. But there were still big issues with intelligibility in certain parts of the nave, issues that back in 2000 loudspeaker technology was incapable of overcoming. The improved signal path only made this more apparent.”

Riverside Church possesses the tallest church spire in the United States at 392 feet, and has the highest of reputations, notably for its role in the Civil Rights Movement.

AD, along with d&b installation partner, Specialized Audio Visual Inc. (SAVI), had already addressed the need for a portable audio system, in the form of the d&b E-Series, for the more ad hoc functions that take place in other parts of the church. But the nave, with its high reverberation time, especially in the low-frequency end of the spectrum, required a loudspeaker solution of an entirely different order. Once more, Michael Cusick of SAVI was asked to make a recommendation: “The existing sound system was an early iteration of a column-style line array that tries to steer the sound using a combination of multiple amplifiers and digital signal processing to create the time differences. That technique is well known, but is not without its flaws. In particular, the attempt to steer sound through such a method creates unwanted artifacts.

“I had already heard the d&b xC-Series, specifically the 24C and 16C, at a meeting at d&b HQ in Germany a few years earlier. The d&b column loudspeaker doesn’t do any fancy active steering with DSP; d&b abandoned that approach very early on. As is so often the case with their products, they achieve the desired result through the sophisticated design of their cabinets and the selection of components. If you listen to a pair of 24C columns from 30 feet away, what you hear is just sonically precise. When I’d first heard them in Backnang I was amazed: You are not listening to the cabinet; what you hear is the content.”

Riverside’s earlier satisfaction with the church’s portable audio system led them to consider just two column systems for the nave. “We made the comparison using quality of reproduction and cost effectiveness as our principal determinants,” Darling said. “In tests within the nave, the d&b product proved better in both instances. Specifically, their column speakers are both inherently cardioid. Mounted to the columns of the nave, there is a situation that with bleed back, you get echoes off the stone columns. Now we have no echoes and already are getting rave reviews from our congregation. The speech intelligibility is much, much better, and for classical music reproduction, the sound is much crisper.”

SAVI installed cascading pairs of 24C-E columns on the pillars with d&b 5S loudspeakers to fill in the edge aisles. “A pair of 16C columns are mounted to the pulpit fascia,” Cusick said. “These are the initial source of sound and called trigger speakers. All driven by d&b 10D amplifiers, each successive pair of columns is delayed to maintain the origin source. The two balconies at the rear of the nave needed to be treated as separate acoustical zones. The lower, which sits beneath a low ceiling, is covered by E8s; the upper has 24C and 16C columns mounted to the front edge of the side walls. Throughout the system we were able to apply only the minimum of EQ, leaving the spoken word natural and open.”

Darling was more than pleased. “The work done was exceptional. The attention to detail by SAVI was phenomenal, and this was not easy. I mandated them not to drill any additional holes in the fabric of the building, to only use existing ones. They made good on that promise, having custom brackets fabricated that fit to preexisting holes, to allow fixing of the d&b speakers on their correct mountings. This, and the cable runs were completed in just two weeks. In fact, SAVI met the schedule so successfully that they finished early, allowing us and AD to conduct extensive testing and calibration. Everything done was done with extreme professionalism. Jacob Schmidt, our in-house recording engineer, loves the new system and does a great job. As a general conclusion, AD was very comfortable with this selection, and we are very happy with d&b and the work of SAVI in presenting and installing the system.”