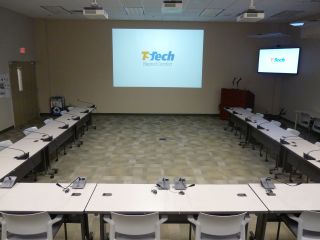 TS Tech products cover a lot of ground. The Japanese company, a global supplier of automobile seats and interiors to major automobile manufacturers worldwide such as Honda Motors, has operations in 72 locations in 14 countries. The headquarters of the company’s American division, TS Tech Americas, in Reynoldsburg, Ohio, manages over 9,000 employees based in Ohio, Alabama, Nebraska, Texas, and Indiana, as well as in Canada, Brazil, and Mexico. To simplify the company’s complex communications needs, TS Tech Americas recently deployed an ATUC-50 Digital Discussion System from Audio-Technica, a leading innovator in transducer technology for over 50 years. The setup combines 32 ATUC-50DU discussion units and an equal number of Audio-Technica ATUC-M58H gooseneck microphones. The integrated system was installed and designed by VST Productions and purchased through Truth Seeker Productions.

“TS Tech is committed to improving communication among the management and leadership team, which is made up of people from different cultural backgrounds,” said Ryuhei Shimizu, interpreter and translator at TS Tech Americas and the company’s project lead (alongside colleague Brian Baker) on the integration of the ATUC-50. “That’s what the ATUC-50 Digital Discussion System is able to do.”

Considering the criticality of the ATUC-50 Digital Discussion System’s mission at TS Tech, the system itself is remarkably straightforward, featuring easy-to-use plug-and-play functionality and intuitive operation, as well as automated capabilities (such as a 12-band feedback suppressor that enables higher volume levels) to make using it completely transparent, while 24-bit/48kHz uncompressed digital audio keeps the sound completely natural. That, said Caleb Purvis, lead integrator at VST Productions (the Ashley, Ohio-based AV systems integrator that installed the ATUC-50), also made the integration process easier. “Communication on the scale that TS Tech has to achieve is complicated, so the simplicity and intuitive design of the ATUC-50 really makes a difference in integration,” he said. “It’s plug and play—you run CAT5 and you’re ready to go.” Purvis said the ATUC-50’s interface has plenty of flexibility, allowing the interpreters running conferences to configure the system to optimize and maximize performance as circumstances change, while the system infrastructure remains bulletproof. “There is lots of potential for customization on the control side, but from a user standpoint, operation is incredibly simple,” he said.

Shimizu said the ATUC-50 fulfilled all of the requirements on his list. “I was looking for a system that wouldn’t miss a single word spoken by meeting participants and that provides crystal clear floor audio to interpreters with no unwanted noise,” he said. “This was the highest priority for me as an interpreter because it doesn’t distract interpreters with poor-quality audio and allows them to fully concentrate on discussions and on their own performance and to work as a team.” He cited the ATUC-50’s feature set as one that intuitively addresses the challenges particular to the interpreter’s mission. These include automatically mixing multiple microphone inputs without a human sound tech tweaking gain or EQs; separating discussion units into language groups so that meeting participants only listen to their language versus constantly changing the monitor channel between floor and interpretation; taking analog inputs in virtually any format from external audio devices, such as wireless microphone receivers and video conference devices, and mixing them into the proper language groups; and ultra-responsive/ultra-fast voice activation that does not miss even a millisecond of speech. “Plus, the ATUC-50 has an intuitive user interface that is easy to operate,” he added.

Brian Baker seconded those comments, adding, “In my view as an interpreter, the system is excellent. I get crystal clear audio in the interpreter booth, making it much easier to interpret than it was before. Prior to getting the ATUC-50, if interpreters had a hard time hearing, the only option was to walk up close to the person speaking. Before, we generally divided interpreting work by sections, and each interpreter was solely responsible for handling certain sections; the interpreter was on his own. The ATUC-50 let us establish a proper interpreter booth, which allowed us to begin working cooperatively as interpreters. Now, with a dedicated booth enabled by the discussion system, we can help each other when one interpreter doesn’t understand a crucial word or phrase, and we can alternate more frequently to avoid fatigue.” TS Tech is able to use the system portably, stored for transport in four cases, able to shuttle between conference rooms in the main office, and at outside manufacturing sites.

In addition to the ATUC-50 and ATUC-M58H gooseneck microphones specifically designed to be compatible with the system, TS Tech is also employing an Audio-Technica System 10 PRO wireless microphone system for conference applications. “The System 10 PRO works well for when someone is presenting a report and wants to stand up and move to the front of the room,” Baker said.

Shimizu added that the quality of the System 10 PRO microphones’ elements is “superb,” and “although it is a digital system, I don’t hear any latency due to digital-analog conversion, and these microphones match very well with the audio picked up by ATUC-50 discussion units.”

“It’s such a great system in so many ways,” said Purvis. “It’s flexible, it’s cost effective, it’s scalable, and it’s extremely user friendly. For a company like TS Tech, with the need to manage multiple languages across so many meetings and locations, there simply isn’t a better solution.”