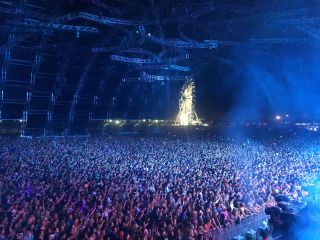 An estimated 300,000-plus people came to Coachella 2018, which took place over two weekends April 13-15 and April 20-22, to see and hear artists including Beyoncé, Kendrick Lamar, Lion Babe, LANY and Vance Joy. Meanwhile, sister festival Stagecoach—where artists such as Florida Georgia Line, Keith Urban, Garth Brooks, Kelsea Ballerini, Kacey Musgraves, and more performed—set new records with over 75,000 per day over three days, April 27-29. What both festivals had in common was the sprawling Indio, Calif. festival site, sound provided by Rat Sound, and the use of Focusrite’s RedNet range of Dante-networked audio converters and interfaces.

At Coachella’s main stage, all 15 delay towers used RedNet D16R 16-channel AES3 I/Os to connect their loudspeakers with the L-Acoustics LA8 amplified controllers powering them through the sound system’s main matrix and QSC Q-SYS fiber network. On the main stage at Stagecoach, 27 RedNet D16R units performed the same task. In addition, the front-of-house position for the main stage at each festival had both a RedNet D16R and a RedNet A16R 16-channel analogue I/O interface. These could accommodate both digital and analogue FOH consoles brought in by performers.

Perhaps the most innovative use of RedNet technology was the application of RedNet MP8R eight-channel mic pre and A/D converters for each row of delays towers at both festivals, a total of 10 in all. These allowed Rat Sound engineers to remotely change the positions of measurement microphones that were used to gauge the SPL at each row of towers, via RedNet Control software.

“We have to keep the SPL within the guidelines established for each festival, and usually that meant physically going out into the crowd with the microphones to measure the volume at each row, which was incredibly time-consuming and exhausting,” said Bjarne Hemmingsen, audio systems engineer at Rat Sound and the crew chief for the main stages at both festivals.

“I had gotten pretty tired over the years of battling the crowd to get these measurements, so I looked at the MP8R and thought, ‘Wait a minute….’” said Hemmingsen, who also did the initial system design work on the PAs for both festivals. “This was the first time we’d tried this, and it worked brilliantly, allowing us to adjust the mics as needed at each row of delay towers, saving us time and lot of effort. We’ve used RedNet at these and other shows and they keep finding new ways to make our lives easier.”