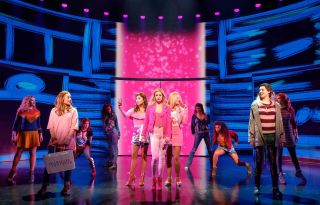 Hamilton. The Book of Mormon. Billy Elliot. The Producers. Every few years, a Broadway musical comes along that sweeps critics and audiences off their feet. This year, that production is Mean Girls, the stage adaptation of Tina Fey's 2004 film of the same name, which received 12 nominations for June's 72nd Annual Tony Awards, including Best Musical.

Also up for a Tony Award at Radio City Music Hall this year was Brian Ronan, who, with the assistance of his associate, Cody Spencer, served as the sound designer for Mean Girls. The duo has worked together on a dozen Broadway productions, of which Ronan has taken home awards for both The Book of Mormon and Beautiful: The Carole King Musical.

Over the years, Ronan has worked with manufacturer L-Acoustics, and he used L-Acoustics products for Mean Girls. Following its premiere at Washington D.C.’s National Theatre in October 2017, the production officially opened this April at the August Wilson Theatre on 52nd Street in NYC with a full complement of L-Acoustics loudspeakers.

With all audio gear supplied by Masque Sound, Ronan and his team specified and installed a number of LA8-powered distributed arrays across the theatre's proscenium arch. Twin arrays of 12 Kara each are supplemented with three additional hangs of dV-DOSC to collectively reinforce the sound designer's own special mix of vocals, band, and other sonic elements.

“With respect to music reproduction, I appreciate Kara,” said Ronan. “Not only can we safely hang more cabinets than dV-DOSC, but its wider frequency response allows us to wash the whole room with a really nice left/right image of the band. I'll also pair SB18 subs with them when they're being hung or if I have little space. And I like to paint the room accurately with the show's vocals using dV-DOSC; for me, I find them to be extremely predictable.”

Mean Girls notably marks the first appearance of L-Acoustics' Kiva II on Broadway as well, with identical arrays of seven enclosures flown on either side of the stage, just outside the proscenium. “When transferring the production from D.C. to Broadway, we found that the show's set took up most of available space on the proscenium sides,” Ronan said. “I wanted to stay in the L-Acoustics family to maintain the sonic signature, so I turned to Kiva II. Its size, weight, and rigging allowed us to stay with array technology.”

Describing the August Wilson Theatre as a “beautiful but challenging room,” Ronan said that he and Spencer worked closely with L-Acoustics' Jesse Stevens in modeling the room in Soundvision and tweaking the ultimate design for optimal coverage. “The ceiling is fairly low, so we had to be creative with our use of arrays. Due to audience sight lines and the need for the lighting designer to have appropriate angles, we had to stay out of the picture. By hanging multiple short arrays we were able to still tap into the power of array shaping, and the final results were accurate as predicted in Soundvision.”

Throughout previews, the sound designer said that he would sit in a different zone each night in an attempt to ensure that patrons in every seating area were hearing the same thing. “The long overhang of the theatre's orchestra section required a lot of attention to make it sound like it does out in front of that architecture, but everything is performing very well throughout the space now,” he said. “I've heard compliments on the sound from many people, but the most important ones are the person who wrote the show, the person who orchestrated the show, and the person who directs the show, and they've all been very vocal and supportive.”

When asked why he continues to turn to the French loudspeaker manufacturer's products over the years, Ronan said: “I go to L-Acoustics because I feel that their systems allow human beings to still sound like human beings, only louder. The crossover technology compliments a show's vocals in a way that I don't find on most other brands and their intelligibility is second to none.”

In addition to the L-Acoustics systems, Mean Girls is also using a DiGiCo SD10 monitor console backstage for the band, paired with a DiGiCo SD7T—which Ronan describes as “simply the reigning champion of digital theatre consoles”—out in the audience seating for house sound. Sennheiser RF is also referred to by the sound designer as “a staple.”