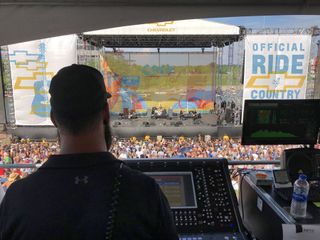 Celebrating its 47th year, the Country Music Association’s latest CMA Fest drew more than 50,000 country music fans to downtown Nashville this June to experience more than 350 artists performing over four days and nights at Nissan Stadium, Riverfront Stage, Ascend Amphitheater and seven other concert sites. Although the diversity of country acts ran deep, from old-school traditionalists to the newest country-pop stars, many of them had two things in common—DiGiCo mixing consoles at the helms of both their house and monitor mixes.

Nashville-based Morris Light & Sound supplied numerous DiGiCo desks for four of this year’s stages, including four SD12—two for FOH and two for monitors—plus one SD11 production mixer at the Chevy Riverfront Stage, with all consoles connected via an Optocore fiber loop to two SD-Racks positioned on stage. This popular venue, located on the banks of the Cumberland River, hosted performances from reigning CMA “New Artist of the Year” Jon Pardi, Scotty McCreery, Lee Brice, LoCash, Frankie Ballard and dozens of others reinforced on two 16-element d&b audiotechnik J-Series line arrays and two 14-element V-Series outfill arrays.

“The GUI on all of DiGiCo’s SD-Range desks is pretty much identical, so most engineers are quite familiar and comfortable on them,” said Morris Light & Sound Senior Audio Designer/Trainer John Mills, who spent much of CMA Fest at the Chevy Riverfront Stage. “It’s easy to grow up on a smaller tour with, say, an SD9 and learn the desk, and then when you get the opportunity to mix on a SD7, you already know how to get around. The same goes for the SD12, which practically everyone was excited to get their hands on seeing that it’s still quite new. The SD12’s layout, feel and sound are all DiGiCo, and they performed very well.”

“We currently have six DiGiCo S31 consoles out on tours right now and our clients love them,” said DCR Nashville General Manager John Schirmer. “With Hard Rock Cafe activating the Maui Jim Broadway Stage in the evenings, we worked with more than 70 bands over the four days of CMA Fest this year. Most of those artists were mixed by the front-of-house and monitor engineers from the Jordan Feliz tour, which carries the same console, monitor and PA package that we deployed at Hard Rock. Both of those guys were very familiar with the desks and system in general, which made for a great, seamless success. And the few other engineers that did mix on that stage were very complimentary of the deployment of the PA as well as how easy to use the S31s were. Everyone was all smiles.”