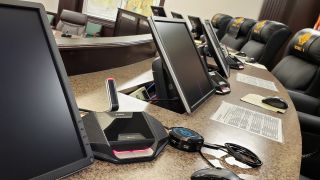 Since 1984, Laredo, TX has broadcast its city council meetings via public access cable television. The city recently updated its 10-year-old conference system with a Dicentis Conference system from Bosch, providing significant upgrades in control, sound quality, and ease of operation with IP connectivity.

Gerardo Leal, the city's public access center manager, is responsible for operating the conferencing system during meetings, and porting the audio into the video feed. The program is aired on large video screens within the meeting room, which accommodates about 100 people. In addition, the meetings are streamed online and aired on the city’s public access channel. Audio, data, and power for the discussion devices all run over a computer-based IP network using Bosch-developed Omneo media-networking technology.

Laredo’s new set-up features 16 Dicentis Discussion devices with voting for council members and staffers. Each device is controlled by a single button for request to speak, mute, and relinquishing the floor. A green light on the microphone indicates a request to speak, then begins flashing when that person is next in line. Once recognized by the chair, the mic status light changes to red to indicate it is active. The device’s five color-coded touch buttons light up when voting is open. Votes are tracked and tabulated, with the results then displayed onscreen for attendees and TV/streaming viewers to see. Each device also features a volume control and headphone jack, with onboard feedback suppression and data encryption.

The mayor/chair uses one of the latest generation Dicentis Multimedia devices, which features a 7-inch touchscreen. This enables a wide range of documents, images, and video files to be inserted into the council room’s big-screen video displays, as well as computer screens located at each council member’s seat.

Each device is connected via a single CAT-6 network cable via a standard network switch connected to the system’s Dicentis audio processor and powering switch. In the control room, an operator tracks system/device status on a display showing a schematic layout of the council chambers—including current and upcoming active mics, and allowing remote override, if needed.

Leal says he was particularly impressed with the Dicentis high-directive microphone, which replaces the long gooseneck mics of the original system. A discreet 4.25-inches long, its dual-capsule design allows a larger speaking distance and superb intelligibility—even in noisy conditions—according to Bosch. “It picks up from several feet away, which basically takes microphone technique out of the equation,” explained Leal. “Now, we don’t have to worry about height or talking distance, and the mics are also visually much less intrusive.”

“The Dicentis system from Bosch gives us outstanding audio and remote system control,” Leal added. “Our operators control our robotic PTZ cameras, character generator, agenda, and other media—recording everything along the way. Having everything networked means smoother-running meetings and an easier job for our techs. We loved our old DCN system from Bosch, and the Dicentis system is a great upgrade.”