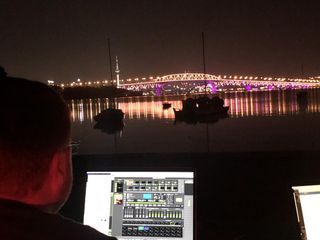 On Auckland Anniversary Weekend, Auckland Harbour Bridge was transformed by the launch of Vector Lights—featuring a renewable energy technology powered light show that ignited imaginations and demonstrated a smarter way to power the city.

The installation was designed, managed, installed, and programmed by Sydney-based design and production company Mandylights, vividly demonstrating the new lighting capabilities and a smarter way to power Auckland as part of a ten-year smart energy partnership between Vector Limited and Auckland Council.

The audiovisual performance is made up of three chapters—the first references Tama-Nui te Ra (the sun), the original source of energy; the second Hikohiko (electrical energy) representing it as energy and technology, and the final Hei te Ao Marama (the future world of light) as an acknowledgement to the diversity and culture in Auckland.

“We approached this architectural project in the same way as we approach any light artwork, concert tour, or special event design” said Richard Neville, managing director of Mandylights. “Put simply, we wanted to make it look cool. Our design, pitch, and attitude has always been to eschew the traditional mathematical, paint-by-numbers architectural lighting design approach in favor of coming up with a highly spectacular design that turned the bridge into its own unique light show.”

Vector was looking for a way to illuminate the Harbour Bridge in a highly energy efficient manner. Plus, the design had to be sympathetic and able to communicate New Zealand ideals and values.

“We needed to be able to show how we would communicate Maori designs and traditional patterns through whatever we did on the bridge,” added Neville. “Another important creative element was to emphasize the connection to the water. The bridge sits very low down to the harbor, which is unusual. Of course, it had to be cost effective too.”

Mandylights spent a lot of time looking at the physical architecture of the bridge. One of the first things Neville did was fly to Auckland to spend a night sitting in various locations around the city taking in all aspects of the structure. He imagined ways to accentuate what is already there, especially the unique structure of girders that sit under the road.

“There’s a fascinating level of detail in all the girders beneath the road deck so we were quite keen to light that up,” he said. “We had to consider that people can get very close to the bridge and can see into all the gantries just sitting beneath the road deck, so that meant multiple views. Close up and personal, or from Waiheke Island 30 kilometres away, you can still see the lighting. It was a big challenge to come up with something that had multiple levels of engagement and offered viewers a unique experience at different sites.”

Environment was the biggest challenge for Mandylights, located in the middle of the harbor, with the crew getting blasted by winds in excess of 40 miles an hour. Add to that salt spray, and in some locations, the fixtures are only 19 feet away from the water.

“There was constant hammering from water and wind, plus Auckland has temperatures well into the 86 degree Fahrenheit range, so you need UV protection,” commented Neville. “Also, the installation has to last for 10 years, so exposed cables were a massive consideration as well. On top of that, the bridge is constantly moving with the vibrations from traffic.”

The outside lanes of the bridge were added after the main structure was built in 1959, with the four clip-on lanes added in 1969. In a matter of seconds, this road deck can move by up to three feet as the load on the road decks above change.

Another technical challenges was access—many of the places where lights were installed were incredibly difficult to get to. Rise Pacific, a specialist rigging company from Sydney, designed and built a completely unique access system to get the Mandylights crew specifically to where they needed to go.

During the lighting installation, the whole bridge power system was being reconfigured to run the bridge off a solar and battery grid.

From the beginning Neville was clear that he wanted to light the Bridge with three types of LED fixtures in three very distinct styles. A wash light was required to light the internal structure of the bridge, a linear strip to outline the entire exterior perimeter of the structure, and finally, an LED dot fixture for the 170 diagonals and verticals under the bridge.

“We wanted to highlight the internal structure of the bridge by lighting the girders, and also pointing some lights down to reflect off the water,” explained Neville. “We wanted the most amount of color and reflection we could off the water to emphasis the connection with the water. With the linear strips we wanted to outline the road deck and the arch as I don’t think people realize what an arced, sweeping shape it has. Finally, we used LED dots to turn the outer girders of the bridge into what is effectively a low-resolution video surface, made out of the bridge architecture itself.”

Mandylights looked at a few variations of applicable LED fixtures, but found they gravitated towards Martin by Harman due to the reliability of product and the incredible support offered by Harman Professional Solutions country partner, Show Technology.

All of the Martin equipment runs off the Martin P3 System Controller, which is fed video by two media servers. The entire system is controlled by an MA2 network so at every distribution board installed on the bridge, there’s an MA2 4Port Node; additional Nodes are in the control room.

“We wanted to put an industry standard control system in place so if we decided to do something different, such as add searchlights for NYE, we have distributed DMX points all across the bridge that are ready to go,” added Neville. “Similarly, if we need to integrate the bridge with other projects in the city it can all jump on one huge citywide network and essentially there’s no reason why a waterfront concert can’t integrate the bridge too.”

The bridge lighting can be remotely managed by Mandylights who will design custom content for special events such as the upcoming Chinese New Year and also Waitangi Day.