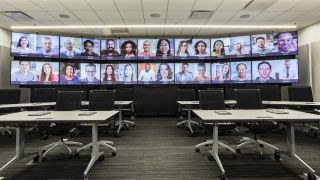 You’re sitting in class and you ask a question. The instructor turns and looks at you, and delivers the answer. But you’re not in the same room; you’re sitting on your couch, 1,000 miles away.

This is what group education is like at the Coca-Cola University Digital Classroom, located at the company’s world headquarters in Atlanta, GA. Developed in partnership with McCann System and X2O media, this cutting-edge lecture hall brings distance learning and in-person education together in one room that blurs the lines between the physical and digital.

Like the typical classroom, it features rows of desks and chairs. But behind them, at the back of the room, is a wall of displays, each with its own camera and soundbar. Each one shows two remote participants in portrait orientation.

“If you’re a facilitator and you have a standard videoconferencing system, you’re only looking in one direction,” said Hampton Whatley, technology program manager for the Coca-Cola Company. “But the speakers that are underneath the monitors, that’s coming from that person talking. Your human interaction is to turn your head when someone is talking to you; you’re turning your head to look at that student. It gives the student a more in-room feel instead of someone just blindly talking. The facilitator can have a one-on-one conversation with the student like he or she is in the room.”

According to Whatley, the Digital Classroom was inspired by a similar room at Harvard University. “My job was to take the idea that our Coca-Cola University team had, and the concept that they saw at Harvard, and manage the whole thing and make it become a reality,” he said. “I was given this thesis statement: ‘Make it happen.’

“The Harvard one was an inspiration, but we didn’t want to just lift and shift,” Whatley pointed out. “We wanted to make it our own.” Working with McCann, Whatley went through a needs-use analysis, including visioning sessions with the primary end users of the space—the facilitators who instruct the company’s onboarding and professional development courses. “We were focusing a lot on the UI, because McCann partnered with X2O to handle the software end,” Whatley said. “It was three companies as a whole, and X2O worked through McCann in this situation.”

The setup they arrived at features 14 Planar 58-inch displays in a 7-by-2 arrangement. Each features a Marshall Electronics point-of-view camera with 125-degree field of view lens mounted at the top, and a JBL soundbar below. “The bottom row has its own perspective views; the top row has its own perspective views,” Whatley said. “If you’re on the far-right-corner monitor, you’re looking out like you’re in the far-right corner of the room in a stadium seating scenario. And if you’re below, it looks like you’re a couple seats below them.”

In addition, there is a large digital whiteboard at the front of the room that doubles as a monitor in situations where a remote participant is speaking, so those in the classroom don’t have to be constantly turning around in their seats.

As Whatley pointed out, the UI was an important consideration. The room runs on a Crestron control system, and the conferencing system is operated using a Crestron touchpanel with a custom interface, which McCann developed and Whatley helped direct.

“One thing I really wanted from them was to show me the monitors,” Whatley said. “Because I have to allow for someone who is running this who might be a layman or needs to make a quick decision to operate it. So, when you’re looking at the UI, you’re looking at the entire video wall. The UI shows the room in a very 2D fashion, but it shows you exactly what you’re looking at. If I want to mute a particular person’s monitor, I can just look up, look at the UI, and just hit a button. I don’t have to be technologically inclined.”

In addition, the PTZ cameras at the front of the classroom are also operated through the custom control interface, and presets for typical movement scenarios are programmed in.

One particular challenge Whatley noted was that this installation was only temporary, a proof-of-concept system—so he had to devise a solution that delivered the desired functionality without negatively affecting the room. “That was a big part of what I was doing: how can I value engineer this where it’s still 100-percent functional, but when we’re all done and we find our permanent space, we’re able to move it out?” Whatley said.

Apart from that aspect, Whatley said that the installation was fairly typical. “I managed all of the infrastructure that was needed, we had our standard teams; I worked to make sure we got the appropriate furniture, made sure we worked with internal teams, made sure we had the appropriate network satisfied,” he said. “After it was a go, it went to a standard AV installation place.”

Overall, the system took around six months to complete, largely due to time spent making decisions on whether or not to wait for a permanent space to open up. It went into operation in December of 2018.

According to Whatley, using the system is as easy as joining a typical videoconference. Remote participants log into the X2O server, and then go through a series of custom-created tests to make sure their video, audio, and network are up to the task. “We tell individuals who are logging in that if they’re able to stream Netflix, they’re able to log in,” Whatley said.”

On the classroom side, the system only requires bandwidth of 60Mbps up, 60Mbps down. Still, the room uses gigabit switches and has the capability of 320 up and 80 down, just to be safe. Speaking of safe, security was also an important factor—lest the AV system open any backdoors to Coke’s legendary secret ingredients. “Coca-Cola is a very secure enterprise system,” Whatley said. “This particular piece is going through a lot of the X2O firewalls. And this system is clean from some of the standard data networks; it’s completely separated from a VLAN perspective.”

In addition to the facilitator who guides the lessons, the room has a technology operator who is able to assist participants with logging in, and can troubleshoot any technical issues that may arise. “Once [the participants] log in, there’ll be a class they see from an assigned perspective, and they will log into the class,” Whatley said. “On the wall itself, you’ll see the individual start to log in, their avatar will appear, and then their camera will appear, and at that point you’ll see and hear them.”

While some organizations allow remote employees to participate in videoconferences with their cameras disabled, such practice is strictly forbidden in the Coca-Cola University Digital Classroom. “In this room there are certain rules we have because we want participation,” Whatley said. “One, cameras have to be on. If your camera’s not on, you’re not in class. Number two, we’re not recording, either. Participation is key, and you not being there is like you not being in class. It’s not a situation of ‘Oh, just record it and send it to me.’ No.”

A frequent criticism of modern meeting rooms is that their technology can stand in the way of things getting started on time. This is not the case with the Digital Classroom. “If everyone’s on time, you’re on time,” Whatley said. “And we open up the class earlier on, so there’s a 15-minute buffer. You’re really just talking about corporate American individuals coming to a meeting on time.”

Overall, Whatley reported that this innovative proof of concept has been exceedingly successful, and the permanent installation at the headquarters is scheduled to go live by July of this year.

“Everyone is really enjoying it,” Whatley said. “If there’s a technical issue, we utilize the technical support that we have.” Things have gone smoothly for the instructors, as well. “It’s always a transition, but the facilitators and the presenters are doing a great job acclimating to this environment. We have some really amazing facilitators and they do a great job of picking up what’s been thrown at them, and I believe they’re enjoying this idea of how we can better move into this digital space.”