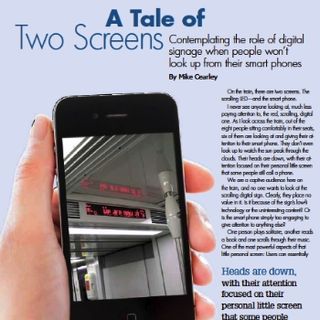 On the train, there are two screens. The scrolling LED—and the smart phone.

I never see anyone looking at, much less paying attention to, the red, scrolling, digital one. As I look across the train, out of the eight people sitting comfortably in their seats, six of them are looking at and giving their attention to their smart phone. They don’t even look up to watch the sun peak through the clouds. Their heads are down, with their attention focused on their personal little screen that some people still call a phone.

We are a captive audience here on the train, and no one wants to look at the scrolling digital sign. Clearly, they place no value in it. Is it because of the sign’s low-fi technology or the uninteresting content? Or is the smart phone simply too engaging to give attention to anything else?

One person plays solitaire, another reads a book and one scrolls through their music. One of the most powerful aspects of that little personal screen: Users can essentially do anything they want to do on it. The experience is theirs, not a preconceived and served-up one. It’s the content they want as frequently as they want it. How can any other screen measure up?

The Missing Piece
In the lobby, there are two screens.
Screen one: The digital signage near the elevator
Screen two: The small mobile phone in your hand

The Sea of Content
As I ride up the elevator, no one speaks beyond, “Good mornings,” and “You doing OK?” After the pleasantries, the eyes turn back to the personal screen—that darn magnet.

No. 3 is hardly sticky, but it is a reason to give your time to it.
These factors are much easier to control on our personal screen. That begs the questions: What is the role of digital signage? And what can we expect them to really do?

For Better or Worse?
People, including me, say all the time, “people are on the move, now more than ever, so it’s important to hit them where they are, which is less in their living rooms and at a desk and more when they’re out and about, in the real world.” This is one of the profound opportunities of anyone in the digital signage business.

We’re also in a time, now more than ever, where no one seems to experience boredom or lose themselves in thought. What happened to quiet time, in the auditory and visual sense? Is there even such a thing today?

These screens are impacting behavior, and I have to wonder if it’s healthy. Is “all on, all the time” or any variation really a good thing for the human condition?