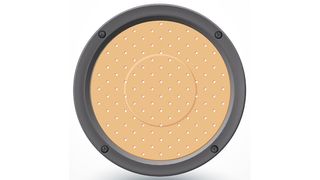 We’re still unclear about the whole “if a tree falls in the forest and nobody is around, does it make a sound” thing. But in corporate, educational, retail, and hospitality environments, there are usually lots of people around, and if they can’t hear what’s being presented to them, it may as well have not been said (or sung, or played, for that matter). With a focus on simplification and networking, audio technology manufacturers are continuing to make sure that their customers’ messages get heard, be it in large gatherings, or more intimate meeting spaces. Here are a few of the latest offerings . . .

MICRO MINI
Designed for broadcast, conference, and theater applications, AKG’s MicroLite Series of miniature wearable microphones aims to deliver crystal-clear sound while taking into account the wearer’s comfort. But unobtrusiveness is arguably the biggest selling point of these mics: the LC81 MD has a diameter of 4.8mm, is 10mm long, and weighs two grams; while the LC82 MD is 3mm around and 6.5mm long. The mics comes in lavalier, ear-hook, and headworn models, are moisture-resistant, and feature a cable fixed with a Microdot connector, enabling compatibility with a variety of connections and wireless microphone systems (including AKG’s own DMS800). For those who like to accessorize, AKG will be happy to sell you wire mesh protection caps, foam windscreens, phantom power adapters, lavalier clips, and sweat and makeup protectors to go along with.
www.akg.com/pro

Audio-Technica’s ATUC-50 Digital Wired Discussion System is an all-in-one solution for those requiring a simple microphone solution for meetings. The system includes the ATUC-50CU Control Unit, the ATUC-50DU Discussion Units, as well as ATUC-M43H and ATUC-M58H Gooseneck Microphones (the latter come in lengths of 430mm and 580mm), and delivers 24-bit/48 kHz of uncompressed digital audio. Users may take advantage of multi-mode operation and a 12-band feedback suppressor, as well as direct recording to the storage device that’s on the front of the control unit. A full system supports up to three control units and 150 discussion units, which A-T says can be daisy-chained or connected in ring topology for added redundancy. The ATUC-50 is controllable via any web browser, no software required.
www.audio-technica.com

In 2008, Focusrite launched RedNet, a series of modular audio interfaces networked via Ethernet. Based on the Dante audio networking protocol, RedNet distributes 24-bit uncompressed audio, and is compatible with analog, MADI, AES 3, Mac, PC, ProTools HD, and of course, Dante hardware. RedNet has gained popularity among many audio professionals, and has been adopted into a number of music schools, including the University of Miami Frost School of Music, which recently deployed RedNet in a studio used for its Music Engineering Technology program. The deployment featured a 48-channel SSL console; a 32-channel API, and an Avid S6, all of which are connected with a range of RedNet interfaces. RedNet was also recently integrated into the Live 1 Building at Full Sail University in Winter Park, Fla., which is used for the school’s Show Production Bachelor of Science degree program.
www.focusrite.com

This fall Shure started shipping its Microflex Advance Ceiling and Table Array Microphones (models MXA910 and MXA310 respectively), along with related audio interfaces and control software. Designed for AV conferencing, and with aesthetics in mind, the mics incorporate Shure’s IntelliMix Digital Signal Processing Suite, which includes its Steerable Coverage technology, giving users more control over where they capture audio from in a meeting room. Microflex Advance uses the Dante audio networking protocol, and Shure says that the system integrates well with AMX and Crestron control.
www.shure.com/americas/microflex-advance

FREE SPEECH (AND MUSIC)
Designed to reinforce both speech and foreground music, Bose’s FreeSpace DS Series of ceiling-mount, flush-mount, and surface-mount speakers are suitable for applications in retail outlets, hospitality facilities, restaurants and bars, and houses of worship. The speakers use proprietary Articulated Array technology, which was developed to provide optimum coverage, and they’re easy to install, according to Bose. Duke’s, a Hawaiian restaurant chain in Southern California, recently deployed Bose FreeSpace DS systems in its La Jolla and Malibu locations.
http://pro.bose.com

With its SWP1 Series of L2 gigabit network switches, Yamaha is endeavoring to simplify the network switch configuration necessary for audio installations and live sound networking. Users can optimize the switches for Dante with a DIP switch setting (settings for things like QoS and IGMP Snooping are preconfigured); and switch monitoring and control can be done via a dedicated Windows app, which gives users a view into network traffic, switch status, and data on individual Dante devices. Configuring an independent VLAN can be achieved in much the same way, with the SWP1 Series featuring three VLAN presets that users may choose with a DIP switch. (For those who prefer to do it all themselves, a “user” mode allows for a fully customized VLAN configuration.)
www.yamahaca.com

For facilities requiring several different audio zones (such as retailers and restaurants), Yamaha proposes its MA2120 and PA2120 power amplifiers, which can be controlled using the manufacturer’s DCP1V4S, DCP4V4S, and DCP4S wall-mount control panels. The power amps, which have been certified by Energy Star, were released earlier this year in conjunction with Yamaha’s VXS Series F surface-mount speakers, designed for small to medium-sized music playback applications.
www.yamahaca.com

Carolyn Heinze is a regular contributor to AV Technology..