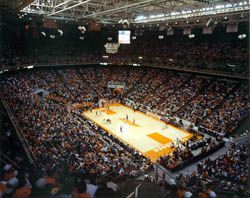 With great athletic action pretty much guaranteed at every contest at UT's Thompson-Boling Arena, Symetrix SymNet ensures that the sound will always add to the intense atmosphere.
Originally built in the early 1980s, the arena was forced to replace the failing system front end as both the UT men's and women's basketball teams reached national prominence. With a need for a full 196 output channels, 12 inputs, and massive processing power, Lowrance knew from experience that the control, flexibility, and sound quality of the SymNet DSP solution was ideal. In all, 18 1RU SymNet Express Cobra units were specified, allowing Lowrance and his team to replace five racks full of equipment with a more efficient 2-rack system front end.

Symetrix's commitment to complete support was also a key factor in Lowrance's specification of SymNet. "This was a big project with a short timeframe and a great deal of challenges," he noted.

Lowrance said, "SymNet did exactly what I needed, giving me distributed processing, audio fidelity, and networking with solid reliability at the core."