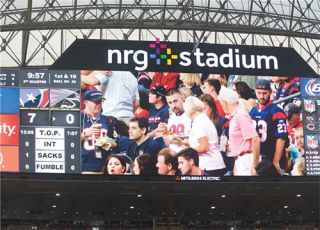 Images at NRG Stadium capture the excitement of a 2014 NFL football game between the Houston Texans and the Atlanta Falcons. The annual Houston Livestock Show and Rodeo—a.k.a. RodeoHouston— is the world’s largest livestock and rodeo show. Even by Texas standards, this show is big: Nearly 1.4 million people attended this three-week event in March 2014.

With crowds this big turning out to see the livestock shows and world-class rodeos, RodeoHouston needs a big home. That’s why it has been located at the city’s NRG Center and NRG Stadium since they opened in 2002. The NRG Center is a convention facility that covers a total of 1.4 million square feet. NRG Stadium (the erstwhile Reliant Stadium) is the world’s only rodeo and NFL indoor/outdoor retractable roof, natural grass stadium.

THE CLICHE IS RIGHT: EVERYTHING IS BIGGER IN TEXAS

With about 1,500 TV screens spread across these two facilities—from in-suite monitors to huge in-stadium LCD displays—RodeoHouston knew that they needed a sophisticated cable TV-like network to serve them all. This is why their integrator, Broadcast Technical Services Houston (BTS Houston), built them a 68 channel analog closed circuit TV system with its own head end. “Because the site these facilities are on—NGA Park—are so close to local TV transmitters, using antennas to bring in local channels was impractical due to multipath interference,” said Bill McKee, BTS Houston’s president. “So we installed DirecTV satellite dishes on the roof of NGA Arena, and then combined these, plus internally generated channels to our own head end.”

This original system worked well in the analog 4:3 aspect ratio days. But once HDTV came along and caught on, RodeoHouston knew they needed to upgrade their in-house CCTV network. So they called on BTS Houston in 2011, and BTS Houston devised a modern, analog/digital hybrid head end solution.

The priority for RodeoHouston was not just to modernize its in-house CCTV system, but to ensure that the new version remained impervious to external RF interference.

The priority for RodeoHouston was not just to modernize its in-house CCTV system, but to ensure that the new version remained impervious to external RF interference. That was no easy feat: Just the slightest shield flaw in a coaxial cable feeder line could allow over-the-air TV signals to intrude and degrade the CCTV’s network’s channel feeds. “This is why, when we ran fiber optic cable for the upgraded network, we fused every single connection to create an unbroken glass path,” McKee said. “It worked: Nothing from the outside gets through.”

Moving to HD meant adding QMOD (Quadrature Amplitude Modulation) modulators to the system, to encode and transport the new HD digital channel feeds. To find the right products, “we evaluated several QMOD modulators using several criteria including ease of use, reliability, cost, and most of all, picture quality,” said James Davidson, RodeoHouston’s managing director of audio visual presentation & broadcast. Picture quality was particularly important: Because the RodeoHouston screens would generally be showing fast-moving sports content, they needed modulators that would resist motion artifacts and “blocking.”

In keeping with its competitive heritage. RodeoHouston selected its QMOD modulators by staging “shoot-outs”, in which identical content was fed to different makes/models of modulators, and the visual results compared on side-by-side HDTV screens. In these shoot-outs, “Contemporary Research consistently rose to the top,” Davidson said. As a result, “We built a hybrid head end, utilizing 34 of our existing analog modulators and adding 46 Contemporary Research QMOD modulators for our digital HD signals.”

BTS Houston was pleased to recommend Contemporary Research (CR) QMOD modulators on RodeoHouston’s behalf, and not just because this integrator is a CR dealer. “We were able to modulate each digital TV channel using a single CR modulator for about $2,500-$3,000 each,” said McKee. “In the original plant, they had just one HD channel, and the equipment to put this single channel on the system had cost $70,000.” As well, because the CR QMOD modulators are passing digital signals, there was no need to add bandpass filters to reject harmonics from modulator output. This too was another cost savings for RodeoHouston.

RodeoHouston also liked working with Contemporary Research, because the company was able to meet RodeoHouston’s nonstandard needs. “We needed a mix of QMOD modulators, some having component inputs and some having SDI inputs,” Davidson explained. “At the time our in-house production was a mix of HD content and SD 16 x 9 anamorphic content. The 16 x 9 anamorphic is a rather unusual production technique and needed to be letter-boxed to display properly in our head end.”

“We brought this up with Contemporary Research and they listened to our need and promptly addressed it by releasing a new firmware version that included that feature, and updated all our QMOD modulators with the new firmware,” he continued. “They have since done several firmware updates, all at no charge.”

The degree to which Contemporary Research has extended customer service to RodeoHouston is noteworthy. “At one point, we had some issues crop up with degraded pictures that had me so worried, that we sent back all of the QMOD modulators back to CR to check their chipsets and firmware,” said McKee. “The company did this for us at no charge, even though all of their equipment was trouble-free and the problem proved to be caused by an isolated make/model of monitors that we had installed.”

Looking ahead, Bill McKee is anticipating Contemporary Research coming up with new QMOD modulators that can accept HDMI inputs. “This would help us keep up with technological change, and increase the number of input sources that we can choose from,” he said.

Since upgrading RodeoHouston’s CCTV network to a hybrid analog/digital platform in 2011, the QMOD modulators have worked extremely reliably. “We have only had an issue with one modulator, which we sent to Contemporary Research and they took care of it very promptly,” said Bill McKee. “The system has worked very well for us as the supporting integrator, and for Rodeo Houston as our client.”

RodeoHouston’s James Davidson is even more to the point: “We are very happy with Contemporary Research products and feel they are an excellent value,” he said. In the rough-and-tumble world of world-class rodeo, having products that you can rely makes all the difference, especially when you are serving an annual market of 1.4 million attendees.