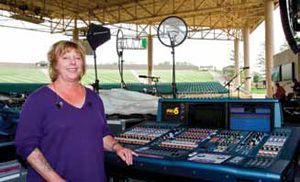 NEW YORK, NY—Pearl Jam engineer Karrie Keyes has taken a Midas PRO6, supplied by Rat Sound, out on the band’s 2010 tour in support of the current Backspacer album.

Pearl Jam engineer Karrie Keyes has taken a Midas PRO6, supplied by Rat Sound, out on the band’s 2010 tour in support of the current Backspacer album.

This marks a digital first for Keyes, who has never before taken a digital console on the road. A devotee of the sound quality of Midas analog consoles, she has been mixing monitors since 1991 and, in recent years, more usually opted for a Heritage desk.

“In the past,” says Keyes, “we have not been able to get (vocalist) Eddie Vedder on a digital [console] because we’ve not got the sound quality, but the PRO6 has really delivered. We have found no issues with latency and the band loves the sound.”

Keyes herself quickly felt at home on the PRO6. “I felt pretty comfortable with it after the first show,” she says, “and the factory support from Midas is amazing.”

Particularly impressive for Keyes was the PRO6’s ability to handle her relatively complex setup. Keyes will be using all 32 outputs for the European leg of the tour as several of the six band members and three members of the tech crew augment their stereo in-ear mixes with wedges and sidefills. “I really love that the matrixes are actually just another set of outputs,” she says, “I have the in-ears on the matrixes and my wedges and sidefills on the aux sends.”

The user-friendly analog design was also a stand-out feature for Keyes. “The key to mixing monitors for Pearl Jam is keeping my eyes on Ed and the band the entire show,” she says, “Pearl Jam has a lot of cues, but they are not scene cues that can be programmed and a lot of them are for more than one person at the same time.