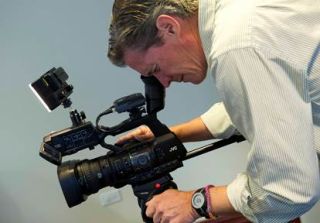 Video producer Robert Hoell shows off one of the new JVC GY-HM650 ProHD cameras that are being used by North Shore-LIJ Health System for a variety of video projects.

Since the hospital system purchased its cameras in late May, its three-man media production team has been shooting HD footage for a variety of projects, from promotional videos on location to surgical procedures in the operating room.