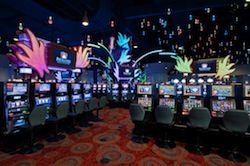 “The Nottawaseppi Huron Band of the Potawatomi Tribe fully understand the ROI for technology,” said James McMahan, vice president and CIO for FireKeepers Casino Hotel in Battle Creek, MI. Perhaps that’s why the casino, opened in 2009 and expanded with the addition of a hotel and special events center in 2012, is so successful.

Each casino area is lit extensively with Color Kinetics LEDs, some even integrated into the sides of gaming consoles, and all controlled by DMX.

The integration of AV technology into the entire property is apparent even from the facility’s entrance. Low resolution Traxon Mesh Video Displays line the façade of the building, cycling through a variety of programmed shows. According to DesignLab Chicago’s Doug MacDonald, who oversaw systems integration for the project, an ETC Mosaic control system sends lighting control data to an E:Cue media server, which handles content playback. “In a sense,” explained MacDonald, “Mosaic treats the video wall like a giant moving light.”

The main casino is divided into four sections: water, earth, fire, and wind. Each area is lit extensively with Color Kinetics LEDs, some even integrated into the sides of gaming consoles, and all controlled by DMX (a communications protocol most commonly used to control stage lighting and effects).

One year after opening, the tribe introduced specific banks of slot machines, called The Elements, which integrate gaming into the AV system. At Elements clusters, progressive jackpot wins trigger AV effects in the immediate area. When certain parameters are met, lights in the area change color, and displays on local monitors broadcast that a jackpot was won.

Behind the scenes, the effects require several systems to communicate and synchronize with one another. The IGT gaming system monitors all gaming activities. It works with the Bally CoolSign content management system, which generates real-time progressive jackpot numbers, and feeds that data through the Magenta Mondo Matrix video switch to specific monitors in the Elements cluster. When IGT determines that a qualifying win has occurred, it signals CoolSign to route “winning” video content through Mondo Matrix to monitors. IGT also signals the Media Matrix sound system, which plays specific sounds in that Elements cluster, and the ETC Paradigm lighting system, which changes the color mood in that Elements area by calling up special content in the Mosaic control. Net 3 protocol drives the system.

After finding success with the Elements AV system, the casino expanded the concept and created the “Red Lightning” promotion. Triggered randomly by the IGT gaming system, the entire casino floor lighting turns red, thunder sound effects play and players receive additional credits if they are playing a game. The system is controlled similarly to The Elements, but affects the entire casino floor area.

“The technology helps us achieve our goal of helping guests ‘get their Vegas on’ by creating an atmosphere of fun and excitement that you would typically only find in Las Vegas,” explained FireKeepers’ McMahan. “We want our guests’ senses to be awakened, and AV is the first way to do that.”

When the tribe decided to expand the property, they came back to DesignLab Chicago to expand the AV system as well. The expansion included a 242-room hotel and 20,000 square foot special events center. The center includes a stage for concerts, video walls, and can also be divided into smaller rooms for meetings and events.

Specific banks of slot machines trigger AV effects in the immediate area when a jackpot is won.

The special events center is on an ETC dimming system with Paradigm controls. The system is on the same network as the casino, which initially caused some concern for DesignLab Chicago’s MacDonald.

“We had a live casino floor operating throughout the construction and commissioning of the hotel and special events centers,” explained MacDonald. “We had to be very careful to ensure that new systems did not take over control in the existing spaces, or cause any interruption on the busy casino floor, but the systems needed to integrate seamlessly once the new facility was opened.

“In addition to a great deal of planning, we decided to filter network traffic so controllers in the event center cannot get past the local network switch and affect the environment in the casino.”

Of DesignLab’s work, McMahan only had positive things to say. “Oftentimes IT and AV seem to be an afterthought for a lot of people, but DesignLab helped make it all work.”

The result is a casino property popular with both locals and tourists that consistently receives good reviews on their “Vegas-style” atmosphere and fun environment. The proof, of course is in the numbers. The tribe bought out the casino’s management company contract three years early, and has discussed additional expansion.