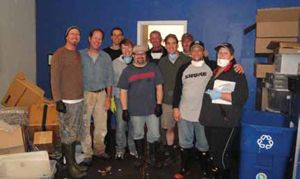 NASHVILLE, TN—In early May, the city of Nashville experienced some of the worst flooding in its history, which affected countless homes, studios, and venues, including the historic Grand Ole Opry House. Soundcheck, a large rehearsal facility and home to Shure’s Nashville office, was partially submerged in up to four feet of water.

The community comes together to help clean up Soundcheck.

“I’ve lived in this city for nine years and I’ve never seen it rain like it did that weekend,” said Ryan Smith, artist relations manager for Shure. “If there’s a bright side to this disaster, it’s been the incredible show of support from so many people around the country. The Nashville music community is an amazing group of people, and this has brought us even closer together.”

Though temporarily displaced from its permanent home, the Opry did not miss a broadcast due to the flood. To aid the Opry in continuing its busy schedule of shows, Shure provided wireless microphones and in-ear monitor systems.

PITTSBURGH, PA—Black Box was recently named a finalist in the 2010 Stevie Awards for iCOMPEL digital signage system, the company’s solution to help small businesses or government offices on small budgets effectively customize and use iCOMPEL with little to no creative staff. The system was a finalist in the New Product or Service of the Year category for Media & Entertainment. For this year’s American Business Awards, more than 2,700 entries were submitted for consideration in more than 40 categories.

SHAKOPEE, MN—Remote Technologies Incorporated (RTI) is bringing the power of its control solutions to the iPhone, iPod touch, and iPad with the new RTiPanel app. With the app installed on any of these Apple products, users can have complete control of RTI’s XP series of remote processors—including the flagship XP-8 and upcoming XP-3 and XP-6—and all connected electronic systems from virtually anywhere in the world. For intuitive operation, the graphical user interface is completely customizable to any system via RTI’s Integration Designer software.

CYPRESS, CA—Advanced Lighting & Sound recently installed multiple FOR-A HVS-300HS HD/ SD digital video switchers at the campuses of Troy, MI-based Kensington Community Church. As a nondenominational church with about 10,000 attendees per Sunday and growing, its video production tasks demand switchers that allow for the flexibility of a growing church while also being user-friendly for the volunteer teams who run them.