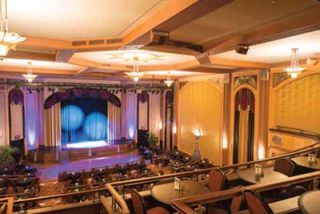 A CLASSIC ART DECO THEATER IS REBORN WITH SPECTACULAR SOUND

The theater’s original raked seating was removed and replaced with a multi-tiered design that allows for varied configurations of tables and chairs, accommodating everything from concerts and performances to dinner theater or movie screenings.

The venue’s audio, video, and lighting systems were designed with that versatility in mind, explained systems designer Stuart J. Allyn of Irvington, NY-based A.D.R. Studios. “The goal was to provide smooth, even coverage throughout the entire audience area, with proper time domains that would have the sound emanating from the stage, regardless of the seating configuration.”

Allyn chose a pair of Renkus-Heinz PNX121 two-way 12-inch loudspeakers for the main system, with two CFX218 subwoofers for low-frequency reinforcement. Ten TRX62 boxes comprise the secondary surround system, as well as providing coverage to the upper and under balcony areas. The boxes were custom painted to blend seamlessly with the venue’s walls. The system was installed by Young Equipment Sales of Hauppauge, NY, under the supervision of Charles Stursberg, director of audiovisual theatrical lighting and theatrical rigging sales.

Allyn pointed to pattern control as a major factor in selecting the Renkus- Heinz system. “The TRX62 is my favorite over- and under-balcony system,” he said. “Their dispersion is exceptionally wide, particularly for a box with such a small footprint. The documentation on their coverage patterns is exceptionally true and reliable. Their trapezoidal arrays really do array beautifully.”

Coverage is pointless without great sound, of course. “Renkus-Heinz voices their boxes with a real belief in the human voice,” said Allyn. “When I hear vocals coming out of these boxes, they sound like they should even before I touch an EQ. That’s very important to me.”