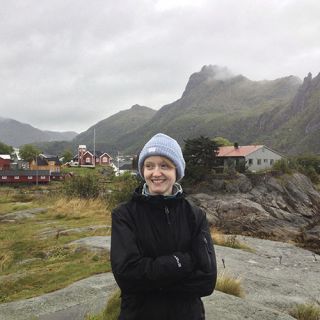 Why You Need to Know Her: She uses phrases like “auralizations of ballet footfall” in her daily work, and we all secretly wish we could be scientific about art all day. She is a musician and a composer, she’s on a record label, and her latest releases came out on audiocassette (super hip) and vinyl (still quite respectably hip). Oh, and her first project as an intern at Arup had her spatializing the audiobook recording of Nick Cave’s The Death of Bunny Munro. Her career has only gone up from there.

How Music Has Been A Constant In Her Life: Her grandfather was a jazz pianist who trained as an engineer during the war, “so he had the music and engineering thing going,” she noted. She studied French horn and grew up in a household where contemporary classical music was in constant rotation. She played lots of new music pieces in a youth symphony in high school. Then in college she switched from performance to composition and benefited from a semester of study with AMM improv music founding member Eddie Prevost in London. Just a few high-level musical ideas there.

How Performing New Music Got Her Interested in Acoustics: On tour with the SEM Ensemble, “I realized that in certain halls, different pieces sounded good.” And she landed at Rensselaer Polytechnic Institute, studying in a multidisciplinary acoustics master’s program that merged music students with physics and architecture students “to help us understand all the aspects of it. It was an intense year, but because I felt like I hadn’t gotten enough of the background, math, and science, I stuck around for a Ph.D.

That’s When She Became Interested in How Performers Perceive Music Spaces: For her Master’s research, and later for her Ph.D., she applied her newfound knowledge of ambisonics to measure concert halls with a 16-capsule microphone she built herself (the professional ones cost upwards of $30,000). Then she had musicians come into Arup’s Soundlab and measured what drove their preferences for stage acoustics with a real-time system she built with Terence Caulkins to convolve their playing with the acoustics of halls in a “blind” representation of each environment. That’s probably a pretty good way to get into acoustics.

How She Continues to Bring Art to Arup: Sound installation and sound art probably aren’t the biggest money-makers, but it’s good to have the Arup name affixed to visionary projects like “Imagining the Lowline” and others. “I would love it if at some point, clients of building design and architects thought about incorporating sound design and sound art in their spaces. If it wasn’t just about code, but about creating an experience for people.”

How She Loves to Take On Huge Projects, But Knows When to Collaborate: Initially, she volunteered to design the soundscape for RAAD Studio’s “Imagining the Lowline” project, which for fundraising and public awareness building purposes would simulate an underground park that echoed the tremendously successful Highline in New York City. I realized I couldn’t get perspective on this by myself, and Alban Bassuet from Arup helped me out with content. Then we ended up hiring more people to help us with the actual installation—I don’t know how to operate a genie lift—it was a massive collaborative effort.”

Get to know the rest of The Nine...