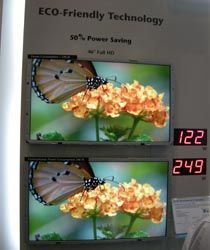 All the major module suppliers went out of their way at SID to show that they are reducing the power consumption of their LCD displays.In order to gain some perspective on the video display products debuting this month at InfoComm, it might be valuable to cast a glance at what the future holds for this segment. After all, today's specifications for long-term projects might be affected by new display options before installation and commissioning is complete. Furthermore, an awareness of what's to come might also help solve some of your clients' more complex requests.

Last month, the Society for Information Display (SID) show provided a preview of what will-or may-be coming to market in the near term. If you can put the instant gratification to purchase all the neat stuff aside, a show such as SID, along with the conference sessions that together with the exhibits comprise "Display Week", lets you see which among the products you install today may be obsolete in the next year or so, and helps you begin to think about some of the benefits of new technology that will help you sell future upgrades to your clients.

Power Up
Right out in front, in what seemed like every other booth on the exhibit floor, products were shown to claim lower power consumption for LCD displays. Mind you, this was not in comparison to plasma, but rather showing today's LCDs against modules with advanced CCFL lighting, LED backlighting, or the use of special filter films. In most cases, the power for the new displays was half that of the current products.

Reduced power consumption for LCD versus existing CRT displays is just one of the ways to justify an expedited replacement cycle to clients today. When these new panels reach the market in a year or so, you'll have another reason to retire any remaining CRTs and think about suggesting the replacement of LCDs and PDPs that are approaching the end of their life cycles.

"Green" as a theme was very visible beyond the lower-power LCDs. To press the point, the LCD TV Association introduced a "Green TV" logo for TVs that can monitor external ambient light by lowering backlight power in darker rooms.

Also prevalent were the various technologies for 3D display, ranging from systems with varying types of active and passives, and in one case, the use of a screen construction that, within a somewhat limited viewing angle, delivered 3D with no glasses at all. The moral here? As the folks on the program production side of the fence increase the universe of 3D programming and make it easier to create and distribute to 3D video compatible digital cinemas, 3D video is something that you need to put on your radar for the next few years.

The use of small sized displays as electronic shelf tags was a major pitch by suppliers at SID.
No pricing or go-to-market partners were announced, but availability was quoted for later this year. And, it worked! You won't light up an auditorium with this one, but be on the lookout for it, as the small size of the 220-gram, hand-held product should charge your mind with any number of profit-building applications.

Also on the small-screen-size range and not quite yet in volume production, but certainly something that lights up the imagination as well as the display screen, were the numerous suppliers showing curved displays. Regrettably, they are convex, not concave, as seeing them made one wish for large screen, high-resolution displays you could wrap around a building's pillars. Oh, well, maybe next year.

On The Move
Small-sized and able to be easily moved were rollable displays from companies such as Eindhoven-based Polymer Vision. Available in both monochrome and 65k color in sizes up to 5 inches diagonal, these e-reader displays have an undeniable cool factor when they suddenly roll out from their spindle. To the average user accustomed to rigid displays that make very nasty noises if you try to "fold" them, this is yet another product for applications such as museums, kiosks, and other interactive displays where something different makes the difference between getting the job and losing it.

Also still to come in the next 18 months are 6-inch oval and 1.4-inch round and donut-shaped LCDs from LG. Here, too, it is a question of your being able to rationalize the use of something unusual to get a client's attention.
More pervasive at SID, and thus leading-edge evidence of a trend, were small monochrome displays that didn't bend, roll, or come in funny shapes. What they did do was consume a minimal amount of power, provide a crisp display typically in the "sub-half VGA" resolution range at around 304x406 that take digital signage down to a micro-sized level. Perfect for use as electronic shelf tags at retail POP or in industrial applications, they are becoming very popular in Europe, and there is no reason why you can't be among the first to offer them to clients here.

The Big Picture
At the other, larger-screen-size end of the spectrum, one notable product was the Quad HD, a 3840x2160 LCD display from Samsung, taking similar past prototypes from other module suppliers one step better by using LED backlighting to cut power consumption and increase contrast.

Full-size digital signage displays were given their due at SID with LG showing a signage display with transflective technology that is optimized for high visibility in outdoor installations where direct sunlight is often a problem.

Next Up: OLED
If you were to ask what the biggest splash in new technology was at SID this year, the answer would have to be OLED. Still more practical in smaller sized displays for mobile applications such as cell phones, their potential in larger sizes was made evident by Sony's 11-inch OLED model being awarded the honor of a Gold Award as SID's "Display of the Year". Still in prototype size, OLED displays up to 31 inches were shown on the floor, as were smaller sizes form companies such as Epson, with their 2.8mm think "Ultimate Black" display with incredible contrast.

OLED may be one product that, as a result of the incredible coverage it is getting in the consumer media, requires explanation to clients about why it is not yet available in market-ready products in large sizes, and won't be for some time. At the same time, even when the size is right and the pictures stunning, long-term reliability is not yet proven and pricing is still high.

(Think $2,500 for Sony's XEL-1.) Be ready to suggest an alternative that is a better fit, and promise to call when OLED is truly ready for prime time. That may be as early as 2009, according to a keynote speaker from Sony, or a bit later. Only time will truly tell.