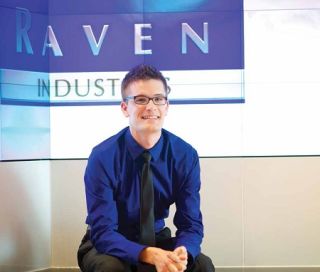 Andrew Simmons, Senior IT Technician, Raven Industries
Photo by Lauren Neff Employ the term “AV/IT convergence” and you’re often met with exasperation. “It’s already happened,” people will argue. “It’s old news.” But while the marriage of the two has been a prime topic of discussion for quite some time, some believe that we haven’t gotten past the honeymoon phase.

TJ Adams, director of product management for installed systems at QSC LLC, an audio products manufacturer headquartered in Costa Mesa, California, spent the first half of his career in IT, part of that time as an IT manager at an airport. He argues that the AV industry needs to begin thinking of itself as a subset of IT, much the way the telephony industry now does. “Telephony and Information Systems were separate industries until Cisco created a little niche with their CallManager 1.0 [in the mid-Nineties], a telephone-based on a computer server, and now that’s become the norm,” he said. As it stands, however, Adams argues that the vast majority of AV products have not made the full transition to IT. “The first wave was practically every manufacturer in the AV industry put an RJ45 port on their stuff, and so now it became what they think of as an IT product. But that’s only the first step.”

Tech managers, Adams acknowledges, need more than just RJ45 ports; they want to know that the AV products they’re considering play well on their networks. Then, of course, there’s the issue of security: once interoperability is taken care of, is the network vulnerable because appropriate security protocols aren’t embedded into these systems? “[As a tech manager,] I want to run my email as well as my networked audio and video on the same segment or the same physical infrastructure—I don’t want to run a separate network,” he said. “But frankly, that’s what IT is resolved to at the moment … IT tends to resolve to, ‘we’ll put it on a separate network, we’ll physically isolate it. That way, no one in the building or on the campus will even know it’s there.’ And so that’s one of the areas we have to step up in. We’ve got an RJ45 port on our boxes. Now we need to put security in place that’s world class and on par with what their expectations are.”

Another challenge AV presents to IT is that latency: while it doesn’t really matter if email is delivered in precise real time, with audio and video, this isn’t acceptable. “[IT professionals] are used to asynchronous protocols like email or even, to some degree, their telephony systems, which are more forgiving of a network that is not operating on a real-time basis,” Adams said. “When you think about a network, it’s totally different than a point-to-point system like we think of in AV.” Network switches are generally calibrated to send packets in blasts, which are then reconstructed and buffered at the receiving end. “That system, that way of thinking, doesn’t work for anything in the AV space, whether it’s video or audio. It has to get there on time, it has to get there in order––those packets have to be ordered on the network.”

Andrew Simmons, senior IT technician at Raven Industries, a technology developer for agriculture and industry headquartered in Sioux Falls, S.D., notes that one of the challenges he and his colleagues face is competing with what consumer technology is capable of delivering to end users in their personal lives. “It’s going so fast that now the businesses are really having to catch up because [their end users] are demanding the high quality video that they are used to at home,” he said. He notes that last year, Raven increased its Internet bandwidth at most of its remote locations, which has helped address this demand. “Before, our MPLS connections were lacking, and so in the last year, as technology speeds ahead the pricing is getting extremely competitive, so we were able to leverage that and get higher Internet speeds, so that’s helped.”

While AV/IT convergence is about managing technology, it’s also about managing people. At West Virginia University in Morgantown, W.V., Spencer Graham, professional technologist, manager of operations for the WVU Information Stations, oversees the management of the university’s 150 digital signs from a central management platform by Four Winds Interactive. Graham noted that while different departments and colleges are responsible for programming content, they must follow the guidelines and procedures that were developed by his team. “It’s a nightmare when it’s not a centralized model because it’s herding chipmunks at that point—everybody’s doing their own thing, there’s no continuity, and there’s no continuity in things right down to the branding,” he said. “We make people do things by the book. The brand is the brand. This allows us not to have some of those problems.”

These issues aside, Adams believes that the AV industry is making genuine inroads in bridging the gap. “I think more manufacturers are learning that they can’t just pay lip service to being on the IT platform, and that they have to truly re-architect, in some cases, their platforms, to make them suitable,” he said. The challenge here is fulfilling not only the needs of the end users who are looking to AV technology to streamline work, but also those of the tech managers who are responsible for keeping these systems operational. “The internal IT provider isn’t going to want to buy analog gear, or point-to-point gear anymore. They’re going to want to buy something that fits their technology paradigm. There are more and more companies that are embracing that, and I think if we stay on that trajectory, we will eventually become a subset of IT.”