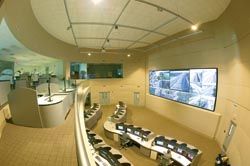 Opportunities abound for the network-savvy AV dealer, observed AVI-SPL's Sean LaNeve, noting that the creation of 'middleware' is a potentially profitable niche. In transportation applications, such as AVI-SPL's solution for the Florida Department of Transportation's Intelligent Transportation Systems (pictured), encoded or compressed video streams coming into a traffic management center are displayed on large projection walls and flat screens. The middleware in that case is the control for the cameras.There may be a touch of hyperbole in the parallel, but just as there's no business like show business, there will be no show like next month's InfoComm show. This year's gathering in Las Vegas would be novel enough, thanks to the first-time integration of NSCA's Expo and training programs. But add the co-location of a large IT and telecom event, NXTcomm, in an adjacent hall of the Las Vegas Convention Center and you have the potential for a truly landmark occasion in the evolution of our industry.

What kind of landmark, though? Does the presence of an IT industry event open up new doorways of opportunity for AV integrators? Or should the prospect of thousands of IT professionals strolling down the aisles of InfoComm fill the AV community with dread?

"At the AV dealer level, the idea of a load of network integrators coming into InfoComm from NXTcomm is scary," said Steve Villoria, CEO of Advanced Media Design. "But for the manufacturers, who've been clamoring to create partnerships with the network integration world, it's a boon."

Mind The Gap
Through its suite of MediaPOINTE products, California-based AMD aims to bridge the gap between the worlds of AV and Internet Protocol (IP) communications. The MediaPOINTE line of digital media recorders, network streamers, video-capture devices, and media management systems effectively adds functionality over IP networks for the AV integrator, without them having to be IP-savvy.

In the three-and-a-half years since AMD acquired Conferserv and transformed its product line into the appliance-based MediaPOINTE, the brand has gone from strength to strength, finding uses in education, healthcare, and, perhaps more surprisingly, financial institutions. "Post-Enron, there are a lot of financial services companies who now have to comply with Sarbanes-Oxley legislation, which states that many kinds of trading decisions have to be recorded," Villoria explained. "These companies are global in scale and are videoconferencing on traders' desks all over the world. They need to record video, not just audio, and they need to time-shift those recordings."

AMD began life as a high-end AV systems integrator, and MediaPOINTE is aimed squarely at the AV channel. But Villoria worries that too much of this channel is still pre-occupied with analog technology, and that the opportunities presented by the convergence of AV content with IP communications will be lost on many contractors.

"The equipment that AV integrators traditionally install is evaporating," he asserted. "Fifteen years ago, a rack of analog equipment made sense. Today, all you need for many applications is a laptop and a projector, and AV integrators are ill-equipped to deal with that. They have programmers who can write Crestron or AMX code; what they need is network engineers."

History Repeats
There is a strong sense of déjà vu here. A decade ago, when IP addressability first began to appear on AV devices such as projectors and screens, many industry commentators predicted that unless AV dealers became network-savvy, their business would be seized by predators from the IT world. "There were people saying that the IT industry was so big, they could snap us up and the check wouldn't even get the attention of the bank," recalled Sean LaNeve, director of the Control Room Group at newly merged integrator AVI-SPL.

"The death knell was being sounded," said Sam Taylor, president of AV distribution company Electrograph. "Some people really did believe that the whole AV industry was in jeopardy. It hasn't happened."

In their different ways, LaNeve and Taylor exemplify means by which the AV business has responded to technological convergence in a positive way.

Taylor concedes that his company does now supply a mixture of dealers from both AV and IT backgrounds, but he believes that it's the former who are "leading the charge in the AV space." Part of the reason, he explained, is that the best AV contractors have adopted an open-minded approach to IT and IP issues.

"A lot of pro-AV guys have fallen by the wayside," admitted Taylor, "but they were the ones who made their money just from selling boxes. The ones that survived are the ones who were truly integrating and adding value. That transformation started 10 years ago, and now, with IP, we're coming to another one. The dealers who are prepared for it will turn it into an opportunity; those who are not are going to be history."

Learning Curve
As with any sea-change in technology, the AV/IT convergence is going to need a highly educated workforce to succeed. "You can't teach everyone all there is to know about AV and IT," LaNeve said. "Different folks gravitate towards different disciplines. But as a company we have acknowledged that the convergence is coming, we are actively developing our training courses and standardizing the IT component within those courses."

Electrograph, meanwhile, is updating the content of its Display Technology Experience (DTE) roadshow events to better reflect the nature of today's-and tomorrow's-AV integration projects. "We've been doing our DTEs for four years now, and for our March event in Anaheim, which drew a record attendance, we included an introduction to IP networking among our education sessions for the first time," Taylor said.

So it seems that whether an AV industry event is a hotel tabletop forum for 350 people or the vast international gathering that is InfoComm, there is just no escaping the magnetic pull of network platforms. Above all, according to LaNeve, the co-location of InfoComm with NXTcomm will benefit end users who, up until this point, have not been able to view the full range of technologies under one roof.