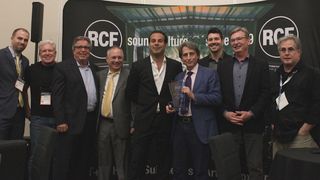 The award, named on behalf of the Italian-based RCF Group CEO Arturo Vicari, is presented to the rep firm with the best sales performance and most professional presentation of the company’s products.

“Every year Quest Marketing steps up to the plate and hits a home run,” said RCF vice president of sales and marketing Tarik Solangi. “They continue to solidify RCF brand recognition and expand RCF presence in their territory.”

“Nobody has shown a better example of a professional sales force than Quest Marketing,” Solangi said, “capturing all vertical market segments and far exceeding goals set.”

Vicari took over the leadership reins of RCF in 1996 and has transformed the company from a component manufacturer to a pioneer in the evolution of the portable speaker system, and now offers a wide array of systems integration products and is a worldwide provider of live sound reinforcement.

RCF USA is the wholly owned distributor of RCF for the RCF Group in the United States.

“To be recognized like this is such an honor,” said John Saviano, principal, Quest Marketing. “Quest Marketing is proud to be associated with RCF. There is not another company in our industry that makes you feel so much like part of the family—maybe that’s why we’ve been successful.

“The reason RCF sells, and why we have success with them, is simply that they are building products that the market wants and needs. Furthermore, they understand that in addition to having very good products, very good people are key.”

In addition to Quest being honored with the Arturo Vicari Award of Excellence, Quest sales representative Matt Pogorelc was named RCF Rep of the Year. “And to have one of the Quest team receiving another award makes it even better,” Saviano said.