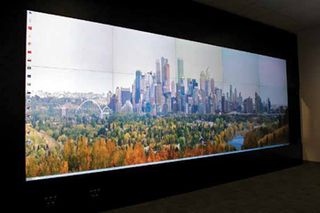 CALGARY, ALBERTA, CANADA—When the University of Calgary cut the red ribbon on its new learning and research center in September 2011, students, faculty, staff, alumni, and the broader Calgary community gained entrée to the future of learning. Hailed as a model for the 21st century library, the Taylor Family Digital Library (TFDL) is one of the most digitally progressive academic libraries in North America.

For faculty, the library’s nerve center is the Visualization Studio, where research can be displayed in detail on a floor-to-ceiling, wallto- wall, high resolution screen with highquality surround sound. Astronomers can explore deep space and the mysteries of the Aurora Borealis in new detail while a geologist can map out soil sample data and discover new patterns.

Before the Visualization Studio was conceived, the model for professional research had been a “cave,” where researchers would go for an immersive experience. Very few faculty or graduate researchers took advantage of it, however, because the technology was difficult to access and use. The university needed a new system that could display everything from subsurface earth crust to astrophysical space, as well as the works of artists and even gamers.

The university issued an RFP for a systems integrator to guide them through the technology assessment and vendor selection. Applied Electronics Limited, based in Calgary, Alberta, won the assignment; their technicians worked with the university to fully understand the researchers’ needs and desires. The next step was a “shoot out” whereby invited vendors presented their processors’ capabilities to the academic faculty.

The challenge for the university was to introduce something new to a diverse group of critical thinkers and get them to agree. Historically, faculty in the various departments worked on their own turf rather than in an inclusive environment. They wanted proof that a single solution could accommodate the needs of many.

The wall features 15 Christie Digital Entero WUXGA LED illuminated DLP rear-screen tiling projectors that display an ultra-high resolution virtual canvas of 9600 x 3600 pixels. “When we asked faculty members about their needs for conducting contemporary research in a digital world, they often stated their need for more digital real estate to simultaneously view multiple digital objects in a collaborative environment,” said Shawna Sadler, TFDL technology officer. “Not only was the amount of digital space significant, but the quality of that digital space also had to be at a high standard. Specifically, the resolution of the screens had to be crisp, latency could not be noticeable, and it had to be easy for researchers to input their research data into the system.”

Applied Electronics and the Jupiter sales and engineering team made sure the faculty was deeply involved in the planning stage. They talked to faculty members to determine the kind of research tools and information each department would need. Among the critical functionality required was the ability to support ultra high resolution, an all-digital format, and the option to launch and run local applications on the display wall. The entire installation would need to fit into a room 290 feet long by 26.5 feet wide with a 10-foot ceiling.

Access to electronic journals was high on the list as was the ability to open many windows at same time, more than a PC monitor would allow. And, of course, supporting native resolution viewing of large digital images was a key concern.

To address these challenges and meet these requirements, the project team designed a large 15-screen monitor wall. The wall is composed of a 5x3 array of 46-inch dnp Cross Prism screens that are made from an acrylic styrene copolymer material. This material is appropriate for this environment because it retains its dimensions, and provides invisible seams. In addition, the screens have technology to eliminate “speckle,” the small bright spots in projected images that are a common problem with single lens projection systems. As a result of these system details, the wall provides a smooth, clean image even when viewed at close range.

A server room located on a separate floor houses a Jupiter Systems Fusion Catalyst 4000 display wall processor that powers the wall. The processor can provide as much as 320 gigabytes per second of bandwidth, which is enough to carry multiple ultra high resolution video signals at a full 60 frames per second. The processor can also drive ultra-high resolution monitors at a full 32 bits per pixel and support virtually any configuration requirement. The system relies on 25 Magenta Research Voyager fiber-optic transmitters to transmit uncompressed ultra-high resolution video signals between the server room and the room containing the display wall.

“It is not often that I can get consensus, but I did on the work of Applied Electronics and Jupiter Systems. The installation went very well and the AV installers were very careful that the space remained open, clean and visually nice through the installation,” Sadler commented.

High resolution and ease of use are the key elements of the new system. The team designed a high resolution wall with abundant digital real estate and the ability to zoom in and out of any window or image. Fusion Catalyst 4000 operates as a PC with Dual Quad Core Xeons, Windows 7, and multiple hard disk drives, allowing users to run mission-critical apps, access data through the network, engage the information, and collaborate on a wall-sized desktop. That means nontechnical faculty can bring their files in and use them on the TFDL system just as they would on their desktop computers. “It takes five minutes to show them what to do, it is that easy,” Sadler said.

The entire installation of the display wall took two weeks without a hitch, and the smoothness of its installation can be attributed to careful planning and the strong working relationship that developed between Applied Electronics and the project team for Taylor Family Digital Library.

“I think we have met the needs of the faculty using this leading-edge technology,” said Sadler. “Our Visualization Studio is now visited by Ivy League schools as inspiration for their own new spaces.”