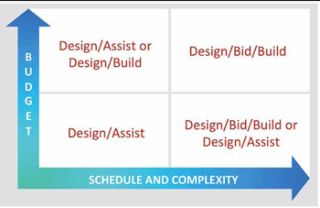 Source: InfoComm Independent Consultants in Audiovisual TechnologyIn 1961, NASA Freedom 7 space flight director Gene Kranz asked astronaut Alan Shepard, who became the first American in space, what he thought about as he sat atop the Redstone rocket waiting for liftoff. He replied, “The fact that every part of this ship was built by the low bidder.”

While the risk associated with an AV system project is nothing compared to a trip to outer space, there are many factors that technology managers and building owners must consider other than price when planning a significant investment in AV technology. While some AV products have become nearly commoditized and can be bought pretty much on price alone, system design and installations are nearly always “custom” projects; no two are the same, and neither are the providers.

Project delivery options include methods that involve independent third-party consultants, or working directly with an AV systems integrator or contractor, and varying combinations of both. Choosing the right one for your next technology investment depends on several factors.

The two most common approaches—not only for AV, but for virtually all construction-related projects— are consultant-led “design/bid/build,” and contractor-led “design/build.”

In the design/bid/build process, an independent consultant is hired to develop some (or all) of the infrastructure and electronic systems designs. From these designs, specifications are written which are then “bid” on by an approved list of AV contractors. In large construction projects, the consultant may be hired by the architect.

The design/build process involves a more direct relationship between the AV contractor and the building owner (end customer). This process is also sometime called a “negotiated” or direct sale, since there is no competitive bid process where prospective contractors bid on the same design; it’s typically used when there is an established relationship between the two parties. System design work is done by the AV contractor.

The National Systems Contractors Association’s (NSCA) “2010 Financial Analysis of the Industry” found that almost 60 percent of AV contractors’ business came from design/build projects compared to competitively bid projects. This ratio has been fairly consistent over the last seven years, with a minor decrease in bid projects in 2007, during what was considered a recession in the commercial AV business. But these trends can differ depending on region of the country and the type of projects.

CEAVCO, an audiovisual provider based in Arvada, CO, does business for clients using both methods. Jack Emerson, president of CEAVCO, said that in many cases, the design/build process works out best for both the building owner and the AV contractor.

“Generally speaking, a design/build project requires a level of expertise, and the customer has decided that you can charge more for that because of what you bring to the table,” said Emerson. “So design/build is more profitable for the AV contractor from that standpoint, but you take more responsibility, and it requires more engineering and sales time. So basically, from a value standpoint, you’re charging for the value. And the value is there for the customer because we can function as extended ‘staff.’”

A third alternative, known as “consultant-led design/build”, is a blend of the two processes. According to consultant Tim Cape, who is the principal consultant with Decatur, GA-based Technitect, this process is especially popular for smaller consulting organizations who specialize in AV and other types of electronic systems. Cape explained how it works: “I’ll be hired as an independent consultant, and go through a program process to establish what the systems needs are. But instead of creating a complete design, I’ll write a design/build RFP (request for proposal) based on the owner’s needs. Then I’ll help the owner review the bid proposals that come in, monitor the process of the design/build implementation, and then review the final result for the owner. It’s really managing the design/build process.”

A variation on the consultant-led design/build process is sometimes known as “design/assist,” which can be considered a “scaled down” version of consultant-led design/build for smaller projects (although Cape noted that it can sometimes work for larger projects too). The main distinction is that infrastructure design elements (lighting, acoustics, space planning, etc.) are only coordinated and reviewed by the consultant, with others doing the actual design work.

The key challenge, Cape said, is knowing which process to select for a given project. Thom Mullins, senior audiovisual consultant with Affiliated Engineers Inc. in Seattle, WA, said that making this decision is not something technology managers and building owners should take lightly.

“There are a number of issues to take into account,” Mullins explained. “The approximate dollar value of the systems and overall project schedule are the two primary factors most people point to. But another overriding issue is the complexity of the infrastructure, like cabling raceways, power, cooling, and network systems, supporting the AV systems. Is the existing infrastructure robust enough to support these additions, or will they need to be augmented in any way? It is rare for the owner or the design team to include a design/build contractor early enough in the project to influence the design appropriately. I think you could reasonably factor in relationships between the owner and the contractor or the consultant on top of this. And, is the client bound by either public bid laws (state or federal government) or the practices of their company?”

According to some laws, for public projects over $100,000 in size, the owner is required to consider a process that includes a bid. As CEAVCO’s Emerson noted, “When you’re spending public money you have to be careful that you choose somebody not based on subjective judgment. By hiring an independent consultant that provides a ‘spec,’ you can then find an approved provider who can meet the project requirements ‘to spec’ at a competitive price.” CEAVCO, like most integrators, does not compete with independent consultants, but only provides consulting services as part of a design-build project.

But, in order to avoid the type of anxiety that astronaut Shepard felt, this doesn’t mean the lowest bidder is the best choice. “A project should be accepted based on the lowest qualified bid,” not necessarily the lowest bid overall, said Mullins, who is who is also chairman of the Independent Consultants in Audiovisual Technology (ICAT) Council for InfoComm International. But how can you objectively determine if a potential AV provider is qualified?

The process begins by sending an RFQ (request for qualifications) to AV contractors or system integrators, requesting the same information from all potential providers. Then, Technitect’s Cape suggested using what’s known as the “Two Envelope” bid method, where prospective bidders submit qualifications materials and price estimates in two separate envelopes. “The way that it works is that you rate the qualifications on who looks like the best organization for the job. Then, sort the second set of envelopes which are the price proposals, in order of the qualification ratings. Then you open the first price proposal, if it’s within the established budget then you take it and don’t even look at the others. The one that you get may be the lowest bid, or maybe not. But they’re definitely the best qualified within what the budget defines. If they’re not within the budget, then you go to the next one.”

It’s no surprise that the existence of the various methods of project delivery can lead to some strained relationships among AV professionals. Some consultants feel that the design/build approach takes business away from them. And some AV contractors feel that consultants only add overhead to a project, and create another layer between them and their client. Of course, the bottom line is that it should be left up to the building or system owner and the technology manager who will be responsible for it on a day-to-day basis.

Mark R. Mayfield is an independent consultant, analyst, and writer in the communications technology industries. He can be reached at mmayf56@hotmail.com.

Owner works directly with AV contractor/integrator, no consultant is involved

Projects under $100,000 low to moderate complexity

Smaller projects where quality assurance is important, regardless of schedule

Considerations when determining if a potential AV provider is qualified: