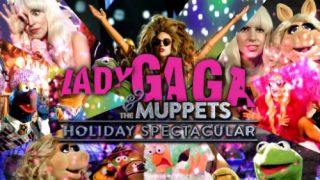 Lighting designer Tom Beck got a call for the show the Monday before the Friday load in as Lady Gaga was finishing her latest album and time was running short.

“I really wanted to use Sharpys and Sharpy Washes,” says Beck who grabbed 20 of the former and 23 of the latter from the inventory of ELS. “It was the first time I had the chance to use the Washes, which I really love. I wouldn’t mind trying a whole rig of just Sharpy units.”

The set designed by Tom Lenz featured “a lot of curves and arches – it was beautiful,” Beck reports. “I put up an arched truss with half a 60-foot radius and lined it with alternating Sharpy Washes and beams, mostly for effects and as a backdrop to the whole set. It looked really spectacular. We also had some more Sharpy fixtures on the floor. I was quite happy with all of them. I love the beams and the Washes were terrific – a great little unit.”

Programmer Mark Butts had used the Sharpy Washes on several projects but this was his first for television. “I was curious about how they were going to work, and they turned out to be really awesome. The Washes get almost as narrow as the Sharpy beams but have color mixing and zoom so you can use them as a wash light. They’re really fast and do all the stuff that Sharpy is known for. We also had a fairly low trim in the TV studio, so the lights worked well in that situation – they were compact and bright, a real winner!”

According to Beck, the grandMA2 is the only console he uses anymore. He likes the system for big shows, like the holiday spectacular, and when two programmers work in tandem because grandMA2 networking “works delightfully.”

Butts found the grandMA2 especially handy for the Muppets and Lady Gaga show whose tight turnaround meant he had little time to prepare. “The shooting schedule was really compressed. The last two hours we were there they were performing off the cuff, and I got about 30 seconds notice. I just started diving in to create effects and cues completely on the fly. grandMA2 does that really well. It has great effects and great movement and quickly came up with stuff I was really happy with.”