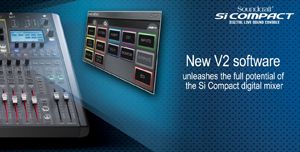 Of particular note is the new user configurable fader layers allowing input channels to be reassigned anywhere on either input layer and any bus master reassigned to either master layer. Now an engineer can put the inputs and returns where he or she most needs them, for example, having the main vocal or presenter always in position 1 on both input fader layers, or mixing aux and matrix masters on a single bus layer to reduce the number of layer changes.

Another useful function introduced in V2 is D.O.G.S (Direct Output Gain Stabilization). A common frustration for engineers is when two consoles (FOH and Monitors) share the same source such as a mic on stage; the mix balance on the second (slave) console can be overridden if the engineer at the master console changes the mic gain and in some environments this could also result in feedback in the slave system. Using a connection topology where the slave console is fed from a pre-fade direct output of the master, DOGS can compensate for the gain adjustment maintaining original system gain between mic in and direct out. One of the advantages of DOGS is, since stabilization occurs ‘locally’ in the master console, only this component requires the DOGS system, and all other equipment connected to the master can benefit from the feature.

Selective Copy & Paste is now implemented allowing all or part of a selected channel or bus to be copied and pasted elsewhere. This basic functionality is augmented with the ability to copy and paste individual bus or matrix mixes and copy/paste FX presets between Lexicon processors. Enhanced MIDI control allows snapshots to be recalled from any external devices capable of sending simple program change messages.

A new security mode prevents unauthorized access to key functions; as well as ‘total lockdown’ security that can be tailored for different ‘operator access’ levels, for example, locking out house EQ and processing for guest engineers whilst allowing access for in-house operators.