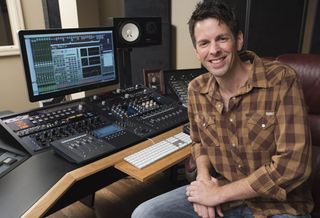 Jeff Juliano
“With most plug-ins, I end up having to put five other plug-ins behind it,” said Juliano. “When I find that I’m adding a compressor and then a filter bank and then something else on top of the first plug-in, it’s because the first plug-in isn’t really doing what I want it to do. Not so with ChannelStrip.” Metric Halo ChannelStrip (an earlier version of which was installed on Juliano’s first Pro Tools rig back in the late 1990s) delivers a fully-featured gate, compressor, and equalizer in every instance.

Because Juliano is a self-described freak about analog gear, the bar for good digital plug-ins is much higher than it might otherwise be. His studio is loaded with outboard gear, both new and vintage, from manufacturers such as API, Neve, Manley, Empirical Labs, and Inward Connections. “ChannelStrip is so good that I often disable an analog send that isn’t doing the job in favor of ChannelStrip,” Juliano said. “The dynamics are reactive and the equalizer has air and warmth. ChannelStrip is useful both as an enhancement for tracks that are decent to begin with and as an emergency repair for tracks that have big problems. It’s a one-stop shop, and there’s a reason why it’s still an industry standard after well over a decade on the market. In fact, I just mixed a single “Champions” by O.A.R. and B.o.B that was recently released as part of Duracell’s campaign to support the 2012 London Olympic Games. I used the Channel Strip on every channel of that session.”

Juliano asserts that not only does ChannelStrip sound good, but it sounds good fast. “In this business, anything that I can use that will speed my work and allow me to have a life… I’ll buy that product,” he laughed. “Really, if I can finish a mix that sounds fantastic with time left over to enjoy dinner with my wife and kid and maybe go play some soccer in the backyard… why wouldn’t I?” On the business side of things, Juliano points out that the timelines for project completion have shrunk – and continue to shrink. “People give me a 25-song live recording and tell me it needs to be available on iTunes in three weeks,” he said. “To me, that’s crazy, but at the same time, it’s realistic these days. With ChannelStrip, I get immediate results. That’s important not only as speed for speed’s sake, but also for maintaining my creative vibe. With other plug-ins, I can get bogged down with things that aren’t really happening, and that can kill my creative vibe.”