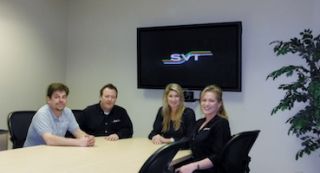 Stepping outside Michigan’s challenging economic climate was a natural decision, as SVT has long maintained a presence nationwide through its managed services offering. But with business booming in the southwest, it became apparent the time had come to establish a brick and mortar presence in the region.

“Gary has a proven track record in the industry of managing sales and operational teams and understands the business from a soup to nuts perspective,” Shanahan elaborated. “He has the right attitude, and the aptitude of course, and will be able to duplicate our culture in a satellite office.”

That culture has deep roots. Numbered among the SCN Top 50 Systems Integrators and employing more than 100 technicians, SVT is a mid-sized, third-generation family business with just under $20 million in annual revenue. “Not to toot my own horn, but we've grown by over 300 percent since my involvement began,” Shanahan said. “We're on a fast pace. We've grown double digits annually even through the recessionary periods.”

Shanahan attributes the company’s success to a dynamic team and steadfast culture. “It most certainly isn't what I do,” he said. “I'm more into watching TV and playing video games and staying out of everybody's hair. I watch my soaps real-time. Even my wife's jealous."

Joking aside, in addition to the establishment of the new Austin location, the company hopes to further build its physical presence around the country through acquisitions. “This year we are looking to make small acquisitions where the owner or operator doesn't have a succession plan in place, where there might be some complementary geography that is offered, and maybe some complementary vertical market focus,” Shanahan offered.

From Gaal’s standpoint, Texas is a great place to be, and much promise lies ahead. The Austin office recently grew with the addition of Analis Bellew, who handles sales and marketing for the branch. “SVT’s natural growth curve is pushing us toward the southwest,” Gaal noted. “We have a lot of business in this region, and when we were looking at setting up an office, we talked to a various partners and determined that the Austin/San Antonio area was a great place to plant our flag in Texas.”

SVT holds a unique position in the region, Gaal said. “We're not just an AV integration firm. Because of our background in racing, retail, and gaming, we do everything.” Describing one project currently underway, Gaal said that SVT is handling the network, TVs, building access, security, video walls, and digital signage.

In terms of opportunity, “we see growth in the southwest, absolutely,” Gaal said, especially in gaming, retail, and hospitality.