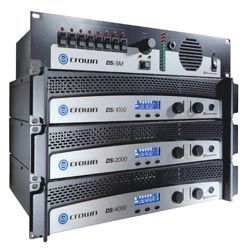 Crown's DSI Series
"The DSi Series marks a true turning point in the advancement of THX approved cinema audio systems as it is the first digitally integrated cinema amplifier that includes the DSP necessary for all loudspeaker processing requirements," says Stephen Morris, Crown director of marketing for cinema, touring and installed sound. "An abundance of crossover features are built into to the DSi Series and each amplifier includes 20 presets, 15 of which are perfectly matched with JBL Professional's award-winning ScreenArray systems. With a DSi powered cinema system, no other THX approved crossovers are required; they're built in to save time and money and improve the overall performance."