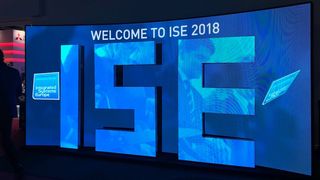 The Integrated Systems Europe (ISE) gathering in Amsterdam has revealed the depth and dramatic scope of AV over IP, with hundreds of new solutions, enhancements, and AVoIP iterations on display. Across the 15 halls of the RAI, it’s clear that AVoIP technologies and signal compression methods are the development paths shaping the next chapter of integrated AV experiences.

Approaches
There are myriad protocols for running and managing AV multimedia content over Ethernet, but it’s hard to argue with the market dominance of Audinate’s Dante. There are now more than 1,300 Dante-enabled solutions available, all showing the “Dante Spoken Here” sign at ISE. Focusrite, MIPRO, Yamaha, AKG, Allen & Heath, and dozens more are using the ISE 2018 platform to launch new Dante-powered networked audio products. Legacy equipment can now be patched into a Dante system thanks to the new AVIO adapters.

While Dante is dominant, it’s not the only protocol for IP-based media transpor (check out Q-SYS, SMPTE 2110, AVB/TSN, and Ravenna AES67, to name a few), nor is it an open standard. While there may be higher priced switches and less OEM endpoints Dante, open standards require no licensing royalties.

To that end, the Alliance for AES70, the open network control standard, is offering classes and training this week. On ISE Day One, Avnu Alliance, the industry consortium driving open, standards-based deterministic networking with AVB/TSN, held its AVIXA Master Class at ISE called “The Evolution of Ethernet and IP for Audio, Video and Beyond.”

On display at ISE are AVB/TSN-enabled solutions from Meyer Sound, Extreme Networks, PreSonus, L-Acoustics, Audix, and Biamp. Genio Kronauer from L’Acoustics added that “AVB is an important step forward for the industry and it’s amazing to see equipment from many different independent platforms working together smoothly on an open standard, without needing to call upon an off-the-shelf, single-source implementation.”

At last year’s ISE, Biamp’s big news was the TesiraLUX, which included an AVB video encoder and video decoder, and support for 4K/60 4:4:4, high dynamic range (HDR), and the Rec. 2020 color space. While TesiraLUX debuted to industry acclaim and has been shipping since September, Rashid Skaf, Biamp’s president, CEO, and co-chairman, acknowledged the company’s desire to meet customers where they are and evolve toward a protocol-agnostic approach. “We have the best solutions in the world, and we will put them on your network,” he said.

Panasonic's new PTZ camera leverages NewTek's NDI interface. Skaf underscored that Biamp is not abandoning AVB, but so-called “protocol wars,” or planting a flag in one camp or another is “not our fight to take,” he said. Rather, the company would focus on platform innovation and developing solutions of the highest class that work cohesively and “elevate the user experience.”

A manufacturer hedging its bets on an internal but open standard is NewTek, whose NDI (Network Device Interface) brings IP capabilities to the broadcast and production world. By integrating NDI, manufacturers can make PTZ cameras available for use in NDI-based video production workflows without additional configuration. Panasonic is demonstrating its NDI-enabled line. NewTek's NDI Version 3 offers SDK enhancements that improve encoding performance and multicast support with FEC (Forward Error Correction).

1Gb or 10Gb?
Another spirited debate in the AV-over-IP conversation at ISE 2018 is the question of whether a product is best designed for use on a 10Gb or 1Gb network. While still a sizeable investment, 10Gb switches have become more affordable, as have UHD displays. If you can offer 4K content at 60Hz and 4:4:4 over the Ethernet with a 10Gb network switch, why not?

That’s how the SDVoE Alliance sees it. The consortium of manufacturers standardizing Software-Defined Video over Ethernet around the Aptovision chipset, has established a 10Gb platform. At ISE, SDVoE celebrated its one-year mark and announced extensive SDVoE training, case studies, and an array of new members adopting the 10Gb strategy.

Crestron's DM NVX solution allows transport of 4K60 video over existing 1Gb networks.One of those new SDVoE members is WyreStorm, which is showcasing a 10Gb Ethernet solution. "A lot of 4K-over-IP solutions claim support for 4K60 4:4:4 with HDR over just 1Gb, so why go 10Gb?” asked James Meredith, WyreStorm EMEA sales manager. “Well, think of the banding, blockiness, and overall image softening resulting from the 20-1 compression needed to fit such a small bandwidth. Only a 10Gb solution gives you a lossless image and audio indistinguishable from an uncompressed source."

MuxLab is also firmly in the 10Gb camp. The company’s new HDMI-over-IP uncompressed extender helps connect one or various sources to one or many displays through a 10Gb Ethernet switch.

In a new video by Aurora Multimedia, Paul Harris, CEO, explains why a 10Gb solution is necessary for 4K60 4:4:4. He suggests that 1Gb works for 4K60 4:2:20 or 4K30 4:4:4 and below where bandwidth requirements are less demanding. "Applications determine what's the better solution." That’s why Aurora offers the IPX line as part of the SDVoE Alliance.

But Crestron and Matrox Graphics disagree. The Canadian manufacturer Matrox Graphics offers streaming of 4K60 4:4:4 over an existing 1Gb network with its Maevex solution. The belief is that if you can leverage an organization’s current system without a quality or performance compromise, it’s a more practical and sensible approach than replacing and building out new core switches, cables, and necessary elements for 10Gb. At ISE, Matrox also announced that its “Matrox Knowledge Net: Tips and Techniques for AV-over-IP Training Program” is now accredited by AVIXA as a CTS Renewal Unit-recognized program. The Knowledge Net seminars are formatted to meet the high ethical and professional practice standards of the AV industry.

Ultimately, though, AV-over-IP reality is nuanced, and every use case has specific requirements. Additionally, some stakeholders are already eyeing up higher-bandwidth IP like 25, 40, or 100Gb, waiting for prices to drop. Can you imagine a world where we need systems capable of managing less bandwidth? Not a chance.

Even the most harmonious alliance still requires some fancy fixes and creativity. One of the gaps in the marketplace occurs when users want to extend uncompressed HDMI 2.0 signals, as full-bandwidth HDMI 2.0 cannot yet be sent long distances over copper without some compression. Fiber optics is one approach for uncompressed AV transmission in 4K, therefore companies like Gefen are debuting new extenders at ISE 2018 that meet this need.

From end users and integrators alike, it is clear that the demand is growing for networked AV, but challenges remain, such as security, legacy equipment, and the shift to the cloud. Cloud-based AV control is one of Atlona’s focal points at ISE as the company demos Velocity, a cloud-based solution for scalable AV control. At ISE, they welcomed attendees to participate in the Velocity Challenge to see how fast users could set up a system. “You don’t need to know Python to set this up,” said Garth Lobban, Atlona’s director of marketing. Atlona is also sharing its refined AV-over-IP strategy for its OmniStream platform with three product families (Pro, R-Type, and Audio that supports Dante, AES67, and analog audio transport).

QSC demonstrated its new Q-SYS Reflect Enterprise Manager and Enterprise Core Processor. Cloud-based AV-over-IP control is also a key ingredient in the disruptors at Utelogy. The Costa Mesa, CA, company’s big news at ISE? They are expanding to Europe (and beyond) with the help of Jonathan Mangnall’s new company, U-Topia Technologies, which has been awarded Master Distributor license for the EMEA market (Europe, Middle East, and Africa). The company also announced a Managed Services Portal (stay tuned for more information).

A Costa Mesa neighbor to Utelogy, QSC, made major debuts this week and explained the plan for cohesive Q-SYS control. It is the agile, scalable platform strategy that QSC believes will help bring the AV industry to the next level of maturity. “Product is dead. We are building a platform,” said TJ Adams, QSC’s senior director of product management, Installed Systems. QSC is using ISE’s stage to demonstrate its new Q-SYS Reflect Enterprise Manager and Enterprise Core Processor.

Harman, whose SVSi brand is a benchmark of networked AV quality, and who was one of the earliest networked AV providers, made the ISE debut of its new AMX N2400 Series Windowing Processor, a network-based windowing processor that supports 4x1 windowing for the AMX N2400 Series video-over-IP solution. The new solution can manage multiple real-time 4K60 streams with no video input or output connectors.

Kramer showed its "drag and drop" Network AV-over-IP solution. Not resting on its laurels, RGB Spectrum keeps pushing the AVoIP envelope. At ISE, the command and control room stalwart is introducing its brand new Zio Decoder App for Smart Displays. The Decoder App enhances the capabilities of smart displays by allowing you to decode an IP stream directly on the display, without external hardware and offers access to the Zio system’s advanced GUI and features.

Sharing a devotion to UX (user experience) and “drag and drop’’ ease is Kramer’s Network AV-over-IP approach and the Canadian manufacturer VuWall’s AV-over-IP solution. It is using the ISE 2018 launchpad to showcase the TRx 2.0 solution for distributing AV signals and content over standard IP networks.