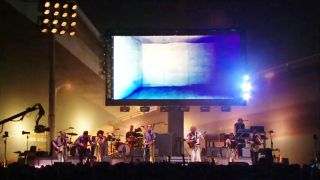 Arcade Fire’s stage set is designed to be “a literal interpretation of what you’d see in the suburbs: an overpass, billboard, stadium,” Sasic explains. “The initial directive was to have a highway overpass as the backdrop with a billboard onstage. The video board was made into a billboard-like structure with a mini-beam surround similar to a movie marquee. There are actual images on the highway backdrop, but when the show’s video is projected, the printed image disappears.

“Four bars of four Wybron beam projectors are mounted on a 24-foot telescoping pole in the set to simulate stadium lights,” she continues. “The color palette is sort of washed out and eerie with the orange and greenish shades you’d see in a mall parking lot.”

Sasic says, “I don’t know how I’d do this tour without grandMA, since we’re using different fixtures at different venues. The biggest advantage is that I can use OnPC which allows me to program in advance of having the fixtures: They send me a patch list and a fixture list and I can walk in with my show on a USB stick ready to go.”

In addition, she programmed a lot of chases with LED fixtures for the tour and discovered that “the grandMA’s effects engine makes it so easy to program a song.” Sasic also praises the grandMA’s reliability show after show. “I have no worries about it crashing or malfunctioning – that’s a wonderful thing.”

When Arcade Fire performed at New York City’s Madison Square Garden a second set of lights was required for the show that feature- film director Terry Gilliam captured for his “Unstaged” series presented by American Express and streamed over the web in partnership with YouTube and VEVO.

“I was the lighting consultant for the webcast. My job was to come in and evaluate the show on the basis of how it would work at all levels; we wanted to preserve the creative aspects of the original show and find the best way to represent Susanne’s lighting,” says Jeff Ravitz. “We wanted to put viewers right in the Garden.”

In order to do that, Ravitz needed to make some changes and additions. “Susanne’s backlights were programmed, of course, to raise and lower cue-by-cue. For the taping, there were many close ups that benefited from more constant backlighting. So we added some fixtures that weren’t noticeable to the audience members but added highlight and dimension to the performers on camera,” he says. “We also added lighting to better see crowd reactions and, for the webcast viewers, the MSG environment.”

Ravitz brought in his own full-size grandMA for the webcast plus programmer Cameron Yeary. “We couldn’t lay the responsibility for our webcast lights on the show operator, in this case, Susanne, who needed to focus on the flow of the live concert,” he explains.

“The grandMA was the perfect console for what we were doing. It allowed Cameron to constantly adjust levels and re-evaluate things on a camera-to-camera basis and execute things very quickly – a must for a live webcast.”

“With so much going on, the grandMA is console of choice. The team that made this happen, Susanne, Jeff and Cameron, is first rate and their professional tools need to enhance their process, not limit it or slow it down,” says Bob Gordon, A.C.T Lighting President and CEO