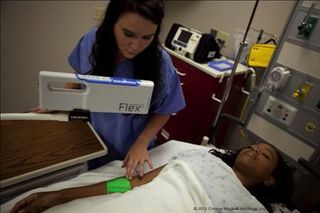 Christie Medical Holdings, has introduced the results of a 3,000 data points medical study that demonstrates the ability of VeinViewer, with Christie’s exclusive high definition image and digital full field technology (DF2), to project vein patterns to near perfect accuracy as compared to ultrasound.