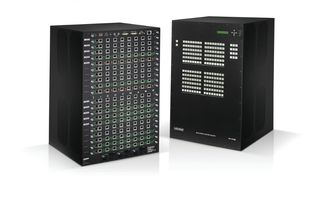 Taylor says. “By supporting HDBaseT, Lightware is responding to needs from the integration space for remote power and the ability to extend RS232 and Ethernet from the matrix to all end points. Our UMX transmitters also can support any connection type.”

The new UMX-TPS product line includes HDBaseT extenders with wall and floor plate models. Targeted to environments such as small boardrooms and classrooms, these devices transmit universal video at resolutions up to 4K, audio, and control up to 180 meters over one CAT cable. The UMX-TPS-TX140 transmission unit is compatible with both Lightware’s HDBaseT extenders and matrix switchers.

Lightware’s own Hybrid architecture is an equivalent of HDBaseT technology delivering video, audio, Ethernet, IR, RS232 and power over a single CAT cable.