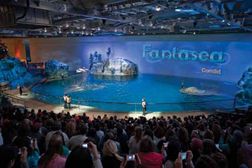 A Whale Of A Sound System In Chicago’s Shedd Aquarium

CHICAGO, IL—The Shedd Aquarium, located on Chicago’s magnificent lakeshore, recently re-imagined one of its most popular attractions—the Oceanarium—transforming it into a full theatrical event, complete with lighting, video, and sound reinforcement. But the Oceanarium’s inescapable cement and “swimming pool acoustics” made achieving a high level of audio fidelity a challenge. Chicago-based independent audio systems designer Jonathan Laney met and exceeded that challenge with a full hemispherical surround sound system composed of Danley loudspeakers and subwoofers.

“Shedd wanted to transform what had become a predictable routine into a fully-engaging story,” Laney explained. “To begin with, Chicago Flyhouse engineered a 170-foot, 8,000-pound Roman shade and projection screen that rapidly—and dramatically—descends at the start of the show, putting the impressive view of the lake on hold and transforming the space into a theater that is dark enough to make use of sophisticated lighting and projection. The shade was also designed to provide effective absorption, improving the acoustic environment, but the space is still an Oceanarium exhibit with lots of volume and reflective surfaces requiring the use of well-behaved loudspeakers.” Laney worked with David Wolthusen of AV integrator Roscor Corporation and with Scott D. Pfeiffer of Threshold Acoustics.

Andy Park, artistic director with the Shedd, approached Laney with his vision for the new show, entitled Fantasea. A big part of what he hoped for was the intimate sound of a theater, with perfectly intelligible spoken word and punchy, crisp music. Moreover, the system had to be flexible enough to meet not just the needs of Fantasea, but of all the future shows that the Shedd will dream up. “A line array wouldn’t work in this application,” Laney said. “I needed something that was relatively small, but with great pattern control, musicality, transparency, and arrayability. The Danley products, with their Synergy Horn technologies, met all of these criteria.”

Laney designed a full theatrical surround system, including hi-fi ceiling speakers for a truly immersive experience with flexible performance. The left and right speaker clusters are composed of two tightpacked Danley SH-50 full-range loudspeakers each, while the center cluster is composed of three. Two Danley TH-212 subwoofers accompany each of the LCR clusters. Eight Danley SH-100B full-range plus subwoofer combos span the left lateral, rear, and right lateral positions. Five Danley SH-100 full-range units serve as ceiling speakers. Because many of the creatures in the Oceanarium are capable of making quite a splash, all of the Danley loudspeakers and subwoofers are fully weather resistant.

“I’ve worked with Danley before and knew what to expect,” Laney said. “But it is still remarkable to hear that kind of fidelity in the sort of space where you would never expect it.”