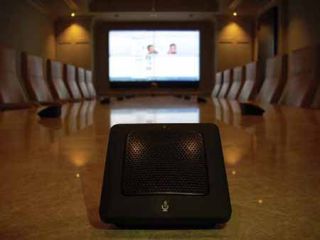 David Erwin is busy, and he’s about to get busier. He’s senior vice president of telecom, executive support, AV, and M&A at Louisiana-based IBERIABANK, which recently inked two acquisitions that will give it 27 more branches across Florida. That means he needs to start assessing the acquired banks’ AV capabilities, starting with videoconferencing.

“We’re getting videoconferencing to the new markets quicker than we used to. That’s one change we’ve made recently.”

Executive meetings frequently cover confidential information, so the AES-256 security of the Revolabs’ system was a plus. Once a deal is complete, businesses often must decide whether to keep the acquired company’s AV gear or replace it with the platforms they used. The latter strategy has upfront expenses that can be recouped later on with lower support costs.

One example is replacing the control system, or at least reprogramming its interface, to match the rest of the company. That way, employees—especially managers and executives who frequently travel between offices—don’t waste productivity trying to figure out how to work the system every time they’re in a different conference room. AV/IT staff also can focus on other tasks because they’re not constantly having to field questions about how to connect to the projector or lower the shades.

IBERIABANK uses iPads for control. That set-up makes it easier to change systems because it’s a matter of swapping apps rather than replacing or reprogramming touchpanels.

“Southwest Airlines’ operational costs are cheaper because they have one jet and one training program,” Erwin said. “That’s fundamentally what we’re about, too. If somebody has a LifeSize or Polycom, we move to our standard because it’s cheaper to operate in the long run.”

When assessing a facility, such as post-acquisition, IBERIABANK uses a checklist to understand whether its rooms can provide a good conferencing experience. Criteria include:

It’s a checklist that other companies could adopt, such as when considering offices to lease. Whatever the situation, such audits minimize expensive surprises later on, such as finding that an adjacent elevator bank means noise or no way to run cables there.

One IBERIABANK audit found that a building’s single-pane windows let a 70 Hz noise leak in from a nearby hotel.

“It is recommended to do sound studies to determine noises in the general speaking frequency range and limit the source, if possible. All other frequencies can be filtered to produce a quality audio conference.”

Building height is another consideration. Street noise becomes less of an issue on upper floors. As a result, the executive videoconferencing suites on higher floors might be fine with single-pane windows, unlike the conference rooms that are just off the lobby for easy access by visiting presenters.

AV/IT staff can focus on other tasks because they’re not constantly having to field questions about how to connect to the projector, activate the system, or lower the shades for meetings. “The higher you are, the quieter it is,” Erwin said. “Those are the best sound-quality rooms I’ve seen.”

Executive spaces also often have harder surfaces—such as walnut-paneled walls and floor-to-ceiling windows to show off soaring views—than rank-and-file rooms. Hard surfaces can create echoes that are problematic for participants both in the room and remote. One solution is to buy some paintings or fiber artwork to soak up the reflections.

“We installed fiberglass panels with cloth covering to minimize echo,” Erwin said. “Partner with your corporate real estate or facilities department to make sure that’s right.

“Acoustic tiles were invented for a reason. It’s highly recommended that you get that right. Go with acoustic panels with a NCR rating of 95 or better.”

IBERIABANK applied those and other best practices to the executive conference room at its downtown New Orleans facility. The room had to be acoustically perfect because, for example, it’s what executives use for the quarterly earnings calls that 200-plus analysts dial into. Misunderstandings can move markets.

Space was a challenge. The conferencing equipment had to be shoehorned into the only available spot, which is about 275 feet away. Executive Elite was a good fit—literally—because of its distributed architecture and Power over Ethernet (PoE) design. That meant the system’s two remote antennas could be hidden in the conference room’s closet, with the two base units 275 feet away, and no performance tradeoffs.

Wireless provides the neat, cable-free look that many enterprises prefer but at the risk of running out of juice mid-meeting. Executive Elite minimizes that problem by providing up to 20 hours of operation per charge, which is particularly valuable for IBERIABANK because the conference room is used so often each day.

Upgrading to wireless came with a bit of a learning curve. For example, when presenters are using laptops, the mics need to be positioned away from their fans.

“Those are the little, subtle things you have to watch for,” Erwin said. “The performance of this mic has been phenomenal. One thing we like is if you need to turn a page and read a transcript on the backside, you can do so because it’s extremely directional. We use these for earnings reports, so it’s very important to get the quality right.”

Executive meetings frequently cover confidential information, so the Revolabs system’s AES-256 security was another plus. “It’s just a safe practice to encrypt everything,” Erwin said.

The new mic system is designed to take advantage of G.711 VoIP and Session Initiation Protocol (SIP) technologies. Those are among the things to consider when choosing conferencing solutions.

“Watch your codecs,” Erwin said. “We use Call Manager. You can’t compress that voice traffic.

“If you pick an audioconferencing provider, make sure they can support the HD codecs. It’s recommended that you run the call IP from end to end versus dialing out over a PRI or POTS line because when you do that, you fall back to SD. There’s no sense in having an HD mic if you can’t get the HD quality to the conferencing center.”

Another tip is not to skimp on mics.

“Buy plenty of mics,” Erwin said. “They’re not that expensive. Make sure you have enough coverage and understand the distance limitations. One foot is a 10 dB loss. Understand the capability of the mics.”