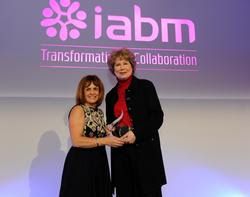 IABM Young Person of the Year – sponsored by ARRI

Student of the Year winner – Jessica Volt
Jessica is in her seventh semester studying Media Technology at Viespen University in Germany. The IABM Educational Foundation sponsors a number of students to visit IBC and NAB every year. “Jessica’s attendance at IBC and her report following the show were exemplary; visiting the show assured her of what she wants to focus on in the future,” said IABM Head of Training, Andrew Jones. “Before her visit, Jessica was a little apprehensive about her first steps into the industry, but her visit to IBC demonstrated that media engineers are needed and supported everywhere and Jessica is now looking forward to getting deeply involved in the industry.”

Young Person in the Workplace winner – Joe Masters
Joe Masters’ responsibilities for Technical Applications support at ClearCom have addressed all product lines focusing on Broadcast and Live markets. He has made it his mission to study products in depth, from the schematics to how each product is built, tested and used by customers. “Joe’s thirst for knowledge has shone through in many 2016 projects such as the Rio Summer Games and with large German broadcasters,” said Andrew Jones. “He has been outstanding at reviewing customer requirements and workflows to optimize their operations. A wise and seasoned head on a young pair of shoulders, Joe is destined for greatness in the broadcast industry.”

IABM International Award for Excellence in Sustainability – sponsored by IBC

Suzanne Dolan – individual contribution winner
Suzanne Dolan is the driving force behind UK serial drama EastEnders’ engagement with sustainability, culminating in the show being awarded a 3-star rating on the Albert certification scheme for sustainable production. As one of the most widely watched programs on BBC Television, the sustainability badge that now appears on the end credits of the program is hugely influential. “For EastEnders, Suzanne has organised Carbon Literacy training to get department heads and staff informed and motivated; set up a sustainability steering group; overseen projects in Elstree which include installation of low energy studio lighting in studios saving 90,000kWh per year; cut paper use by 50% across scripts/documents; reduced DVD waste and road emissions by cutting DVD rushes; recycled props, costumes, sets, paint and paste pots. Suzanne’s positive attitude and absolute determination make her a very worthy winner of this award,” said John Ive, IABM Director of Technology and Innovation.

BAI Communications – company award winner
BAI Communications has successfully introduced a renewable energy Solar PV solution at its Muswellbrook transmission site in NSW, Australia. The trial project has proven reliable in taking this remote site off the grid while continuing to deliver high quality broadcasting, radio, and critical emergency services for over 50,000 end users within a 500km radius. “This successful trial has given BAI Communications the confidence to further pursue its quest to become a carbon neutral organization, and a leader in delivering energy efficient services within the broadcasting industry: just the right credentials to win the award for excellence in sustainability,” said John Ive.

Margaret Craig
“Margaret Craig, CEO of Signiant, is a remarkable person. She has spent her whole career to date in the broadcast and media technology industry in leadership roles with some of the major players, including Snell & Wilcox, Leitch Technology and Ascent Media before taking the reins at Signiant as CEO in 2011,” said Peter White. “Margaret has driven the successful growth of Signiant by leading technology innovation, focusing product strategies and transforming company culture. As a result, Signiant technology is now chosen to meet the mission-critical needs of the world’s top Media & Entertainment enterprises – as well as many other companies that move massive amounts of data.”

Sony Professional – Sony Media Backbone Hive
Sony Professional’s Media Backbone Hive was the judges’ choice for the 2016 IABM Peter Wayne Award. Reflecting the judges’ comments, John Ive said, “Transforming the traditional hardware and software stack into a more flexible node architecture will give users greater flexibility and therefore access to functionality that might not otherwise have been available to them. This is a significant and unique end-to-end production system using IT cloud-based technology. This architecture does mean it is truly scalable and cost-effective to implement.”

Ole Peter Clausen
Ole Clausen is the personification of the successful serial entrepreneur. After graduating in 1972, he immediately set up his first company, CCTV-Corporation A/S. In 1981, Clausen then established the Danmon Group and set about building it out across the Nordic region throughout the 1980s. In the 1990s, Clausen led Danmon Group into Nordic partnerships with Avid and Philips BTS, and since has led a series of successful acquisitions and start-ups.