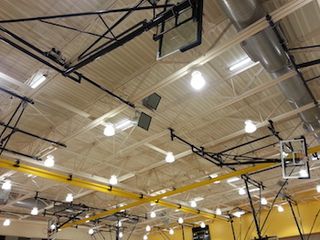 The new AV system in the gymnasium is in constant use by students at Northeast High School.

Northeast High School is a four-year public high school with almost 1600 students and several notable sports teams, a growing music program, and its own designated acting troupe that puts on three shows a year.

Originally constructed in 1964, Northeast underwent a major renovation in 2013. As part of that renovation, the school received new AV systems in its main and auxiliary gymnasiums, its multi-purpose cafeteria and its black box theater.

The loudspeakers in each venue are powered by Lab Gruppen amplifiers and managed by Biamp Nexia DSP systems. The venues are equipped with Shure wireless microphones. A Mackie mixer serves the black box theater. The theater also received a Panasonic 10K Lumen projector for the main area and two new Epson video projectors in the alcoves.

David Martin of HP Electronics says all of the systems have been well received. In particular, he says the gymnasium is in constant use and the school “raves about the new sound system.”