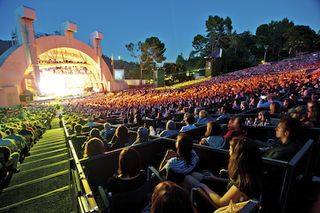 Perhaps no other venue defines the term "audio icon" better than the Hollywood Bowl. With its arched, shell-shaped amphitheater, the 1920s-era Bowl is home to the Hollywood Bowl Orchestra, the Los Angeles Philharmonic in summer, and hosts hundreds of musical events each year.

In the fall of 2012, the Bowl underwent what Master Audio Michael Sheppard prefers to call an upgrade. An L-Acoustics V-DOSC system, leased for several years through a third-party vendor, was replaced by an L-Acoustics K1 speaker system.

“We needed to move toward owning a system with a shelf life,” he said. “It was a natural progression.”

Sheppard and his crew tested several systems, including the newly minted K1, the winner in a blind test. They were all high quality speaker systems, he explained, but the Bowl is unique in shape and size. With a capacity of more than 17,000, making it one of the largest outdoor concert venues (excluding stadiums and outdoor arenas), a unique shape, and the close proximity of neighborhoods, there were myriad considerations, including restrictions on sound pressure at property lines. The system is put into hibernation around Halloween in a climate-controlled space off stage, reappearing for install just before Easter.

Sheppard said. “Scott Sugden, head of applications, touring, USA, L-Acoustics, continues to be our consultant, and comes in the spring to help with install, software upgrades, and tuning, along with our sound designer, Fred Vogler,” Sheppard said. “Everything is laser aligned.”

Regardless of who is mixing the show, every signal goes through the Bowl’s main console. “We put in a fiber optic system, going to a nearly complete digital status and an Optocore loop system,” Sheppard noted. “That enables us to have distribution flexibility and to use both desks together; that’s a boon. Our previous desks had limited inputs, but an orchestra may push 150. Now we have 175 plus inputs available. It’s all about how you distribute the resources for your situation.”

Even the experienced Sheppard is amazed at the success of the single source system. “It’s astonishing to make such a long throw—450 feet—so patrons in the back and front hear nearly the same thing, and it’s side to side seamless. To take a venue of this size and reinforce this sound, whether it be from a delicate violin note or a muted trumpet, is the reason why we all do this. ”

One of the first shows with the new PA, an Andrea Bocelli event, highlighted what they system could do both with voice and orchestra, he recalled. “Before that, when we tested the system in an empty venue, what struck me was the sound of a hi res copy of the Eagles’ Hotel California, a live acoustic version. What hit me most was the sound of Joe Walsh’s fingers; I could hear them sliding across the strings, and to hear that fullness and the absolute beauty of that song was an OMG moment. And it’s only gotten better.”

Karen Mitchell is a freelance writer based in Boulder, Colorado.