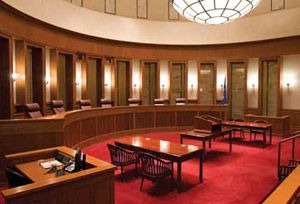 When the Minnesota Supreme Court decided to upgrade their courtrooms, they looked to Minneapolis-based audiovisual integrator, MSpace, to integrate Vaddio camera systems into Courtroom 300. Courtroom 300 is the larger of two courtrooms used in the Minnesota Supreme Court for video recording/streaming all sessions to the Internet and local public television station, KTCA in St. Paul. MSpace upgraded the court’s video system with the Vaddio ProductionVIEW FX switcher and three WallVIEW PRO 300 PTZ camera systems.

It’s not surprising that courthouses are struggling to achieve more, or at least stay on top of things, with fewer resources. Over the last couple of years, courts have undergone considerable cost-cutting measures, especially when it comes to personnel.

Larry Heilman, president of the Topeka, KS-based systems integration firm Smith Audio Visual, recounts that some states have cut their court budgets by as much as 20 to 30 percent, targeting clerks, assistants, and court reporters. “In many cases, the court reporters are retiring, and they’re not getting people to replace them,” he said. Court construction is down both at the federal and state levels, and many facilities close their doors for one business day a week to control expenses. Heilman noted that this is particularly common in the civil arena.

While Smith Audio Visual, which also manufactures its own digital recording system, 1TouchDigital, hasn’t noted a decrease in sales, the company has had to become more flexible in devising how customers submit payment. “We are looking for ways to finance purchases,” Heilman explained. “We have some plans in place, and we are offering them to courts in a way so that they can make payments.” These plans include leasing outright, or purchasing via a lease-to-own program. “If they can’t have a court reporter, they’ve got to record somehow, some way. A lot of courts either buy a court reporting system, or they’re going to close their courthouse.”

Video systems also respond to the need to drive cases through with fewer employees. For example, it’s much more cost-effective if a defendant’s first court appearance is conducted via videoconference. “They can put them into a room with an officer, and that officer does not have to transport them,” Heilman said. This is especially practical when the distance between the detention center and the court is great. “In many cases, they will have to drive up to an hour-and-a-half, one way, from the housing and back, a three-hour round trip just to get the defendant in front of the judge for a five-minute appearance,” Heilman illustrated. “We ask: ‘What are your costs for man hours and expenses related to travel?’” Oftentimes, he added, the ROI on a basic desktop videoconferencing system is achieved in the equivalent of three trips.

In the audio realm, courts are now requiring that the sound from each microphone in the room be recorded on a separate channel. “There is a big increase in the request for multi-track recording in courtrooms rather than just a big MP3 file, for example,” said Barry Luz, systems applications specialist at Bosch Communications Systems. With a large MP3 file, transcription is tedious: When one wants to zero in on, say, just the judge’s microphone, it’s sometimes necessary to listen to an hour of audio between each time the judge speaks. With multi-track recording systems that feature coding to let users know which audio is assigned to which mic, users can go back and listen to any single microphone.

At the Johnson County Courts in Olathe, KS, the Judge’s view includes a video conferencing monitor and an AMX touchscreen connected to the customized 1Touch Digital 8-channel audio recording system and AV control system. The courtrooms use videoconferencing integrated by Smith Audio Visual extensively for first appearances from the detention center so prisoners are not transported to the courthouse, saving the county a large amount of money.

Part of keeping costs under control is specifying products that are easy for systems integrators to install. Mike Updaw, eastern regional sales manager at Ashly Audio, highlights PEMA, the manufacturer’s ‘courtroom- in-a-box’, a self-contained auto-mixing DSP housed in a four or eight-zoned amplifier. “This allows for discreet zone routing as well as a discreet recording outputs standard,” he explained. “It doesn’t get much easier than that.”

With respect to courtroom security, Luz, who works with Bosch’s mass notification and Voice EVAC systems, noted an increase in demand for panic buttons. “There have been recent incidents where alleged criminals are brought into court, and they have been able to obtain a weapon of some kind, and then they are able to hurt people that are in the courtroom,” he illustrated. Traditionally, courtrooms are equipped with one or two panic buttons, if any at all, that are routed to the facility’s security desk. “We have seen a huge increase in the request that there be more panic buttons in the courtroom, which is an unfortunate reality.”

Whether it’s courtrooms or other government facilities, the convergence of AV and IT is continuing. “The latest technologies in IT that interface with networked audio and video are always in demand, be it for advanced Armed Forces simulators or training facilities to something as simple as a conference room or classroom, or multiple classrooms, for that matter,” Updaw said. “It is easy to take advantage of the vast information that is now available on a piece of Cat-5 or fiber networked cable. It is truly amazing how far the industry has advanced in such a short time regarding networking.”

One of the tricks involved in servicing the courthouse market is discerning who pays for what, observed Larry Heilman, president of Smith Audio Visual. “The courts need to have certain equipment, but who benefits from it?” he said. Typically, it’s the sheriff that’s in charge of prisoners, so AV systems are accounted for in their budget, sometimes as a result of pressure from the courts. “Some state courts are run by the counties, but in many states, the courts are run by the state. If it’s run by the state but the sheriff’s in the county, then you have that coordination problem.”

Regardless, when commissioning the installation of AV systems, courthouses are increasingly moving toward total solutions to boost efficiency. “They want to be able to run courtroom activities as fast as they can,” Heilman said. “They want to convict the criminals, but they also want to be fair on the civil end, too. Attorneys can make digital presentations of evidence, and it speeds things up.”

This demand for total solutions means that systems contractors must be well-versed not only in the equipment they’re providing; they must also be familiar with the other technologies that are going on the network in order to convince the client that the system will be bug-free. “If there’s not high confidence that it will work, there will be resistance from the client,” said Barry Luz, systems applications specialist at Bosch Communications Systems. “If it plays nice with the other hardware or software, the contractor will have a much easier time making that sale.”