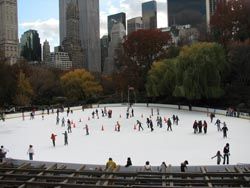 Rink manager Barry Weisselberg also serves as the resident deejay.
"Community wanted them to be 20 feet up from the ice, but the Central Park Conservancy said 'No way!'-so we compromised at 10 feet. However the poles were placed back a ways from the rink walls and as close to trees and rock formations so that they would blend into the surrounding environment of the park area."

Casey also turned to Community for its R-6 bass horn. "I told him that the bass had to be big-no question-we want to feel it on the ice," said rink manager Barry Weisselberg, who also serves as deejay. "During the day, we track MP3s or CDs but at night, my goal was to attract a younger crowd. So I go into my personal library of music and make this place really rock."

Casey specified two horns and set the crossover at about 125Hz with a 12-db slope. Using two Crown MA5002VZ power amps in bridge mode, 10,000 watts of hard thumping bass can be pumped onto the ice. "The smaller speakers around the rink sound so good, we only really turn up the bass at night or when we're playing more contemporary music for the younger crowd. There's not a dead spot anywhere on the ice," Weisselberg said.
To counter the slap-back sound that is heard in the staging area, a series of 10 JBL-25T speaker systems were mounted above the skaters on a wooden trellis in front of the skate house. Another 10 speakers are inside the skate house around the restrooms, snack bar, and locker area.