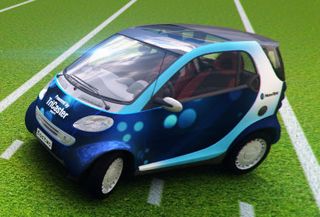 NewTek is offering the 48 contiguous United States and the District of Columbia high school and college sports programs the opportunity to win a 2010 smart car HD mobile production vehicle that the company has used to produce a range of high-profile live productions including the U.S. Army All-American Bowl and the All American Games.

The vehicle, which has also attracted broad attention at industry tradeshows, has been outfitted with a TriCaster 455 multi-camera live production system and control surface, a 3Play 425 instant replay system, and swing-out monitors—for a total value of more than $50,000 USD. NewTek is accepting entries now through September 30 with the grand-prize winner and 9 finalists announced on December 16, 2013.

“NewTek video production systems are the leading choice of colleges and high schools for producing live events because they offer the most complete set of integrated production tools in a single offering—and at price points that are very education-friendly,” said Carter Holland, executive vice president of worldwide marketing at NewTek. “For the past couple of years, we’ve used this car throughout the US to demonstrate how easy it is to capture, produce and live stream any type of event—from virtually any location. This contest provides us with the opportunity to give something back to the education community that has played such an important role in helping NewTek to establish its leadership position in the video production industry.”

Ten schools will be chosen as finalists and will be asked to submit a video entry. The grand prize winning school will be announced December 16, 2013 at the Sports Video Group, League Technology Summit in New York. The remaining 9 finalists will be awarded a TriCaster 40.