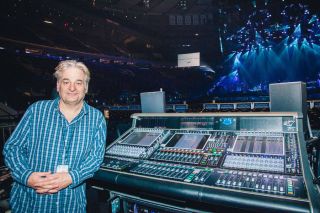 Front-of-House Engineer Toby Francis
Francis, who is approaching his eighth year of using DiGiCo consoles almost exclusively, said, “It’s very, very easy to mix music on this console and it works in a very straightforward manner. It’s got everything you’d ever need onboard. For the last two years I’ve been using a Waves SoundGrid server, but prior to that I didn’t—I just used the console and nothing else.”

Although he typically favors DiGiCo’s SD10 desk, Francis switched to the SD7—supplied by VER Tour Sound—for “The Honeymoon Tour” in order to better accommodate the show’s 90-input channel count. “It’s a blend of track and live inputs, with the emphasis on live inputs,” he says, including multiple keyboards, guitar, bass, drums and a small string section. “The only thing that is obviously track is her background vocals. She did all of the backgrounds on the record, so the only way to make it sound right was to continue that.”

The SD7’s snapshot capabilities are proving to be invaluable on this tour: “It’s pop, so the levels are pretty drastically different from song to song. On a lot of the songs there’s an intro section, then into the regular song, so I use at least one snapshot to set up each song. A couple of the songs have more than one,” he says.

The DiGiCo’s multiband dynamic equalizers and compressors are also essential to his mix, says Francis, who groups drums, bass, keyboards and other instruments separately. “I take all of those groups into yet another group of all the music and create a separate path that’s all of the vocals. I treat the two paths completely separately, then I combine them into the Meyer Sound LEO/LYON PA system.”

He continues, “I use a lot of layers of compression. I use the Waves C6 on Ari’s vocal, then go into a group with the onboard three-band compressor and take her vocal and the background vocals and compress them together there. It sounds so polished. My daughter came to a recent show and I put her in the front row. She was showing me videos she had made and the sound was crystal clear.”

The onboard processing is key to the sound quality of the DiGiCo desk, he believes. “I use the multiband dynamic EQs everywhere. Instead of doing drastic low-mid cuts I’ll just use compression. The information is still there, it’s just compressed so that it fits better. There’s a lot less contouring and a lot thicker sound. I think that’s why you hear things on the DiGiCo that you don’t hear on some of the other desks. There’s just more there.”

Ariana Grande in Madison Square Garden, part of her Honeymoon Tour
Francis and Hoffmann share one large rack. “We call it our ‘execution rack.’ It has two DiGiCo SD-Racks, a MADI converter and word clock distribution to all of the external digital devices,” Francis said. “It’s also got all of the wireless receivers and ear transmitters, all hardwired. The stage rolls at about two o’clock, the monitor console rolls under the stage and the rack rolls in. The cabling is pre-laid when they build the stage so we’re literally checking things ten minutes after the stage rolls.”

Tracks from two Pro Tools computers pass via Antelope Audio interfaces into a D.O.TEC MADI switcher that selects machine A or B and sends it to an Optocore converter. “That shows up like a stage rack,” explains Francis. “Of everything we tried, that was sonically the best way to do it, and it gave both front-of-house and monitors the most versatility.” The system also enables timecode distribution for the show’s video, lighting and laser automation.