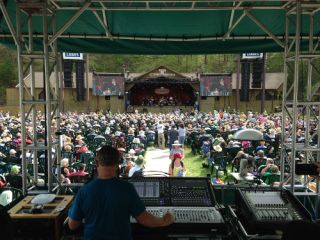 DiGiCo consoles at MerleFest
MerleFest was founded in 1988 in memory of Eddy Merle Watson, son of bluegrass legend Doc Watson, as a fundraiser for Wilkes Community College and to celebrate "traditional plus" music, a term coined by Doc Watson to describe the wide variety of musical genres and styles celebrated at MerleFest.

Since the festival's beginnings, Greensboro-based SE Systems has been handling sound for MerleFest. SE Systems CEO and Founder Cliff Miller was working with Doc Watson at the time and helped put the audio production in place for the first MerleFest, which was mounted on the back of a flatbed.

DiGiCo consoles, according to SE Systems Media Relations Director Bryan Smith, are well suited for country music and bluegrass. "Acoustic instruments come across in a very natural way," he says. "When you put acoustic instruments in front of a mic, you don't want the preamps, effects or processing to change the sound. Cliff carried the DiGiCo SD10s on tour with Alison Krauss and we currently have two out with her now."

DiGiCo console
He goes on to explain that the DiGiCo boards are "very transparent and sound like the old analog desks." When comparing digital consoles, DiGiCo's 96KHz performance was "what also helped us decide on the SD10s. All of the plug-ins and effects work perfectly and it's a fairly easy console for guest engineers to mix on in a festival situation.”