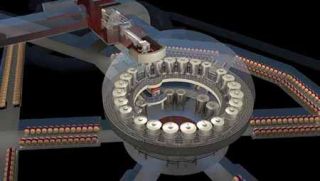 Vista Systems Spyder creates projections on a dome ceiling that gives winemakers at Palmaz Vineyards a graphical representation of control screens showing the thermal state of their fermentation tanks. Winemaking is truly both an art and a science. Perhaps nowhere is this more evident than at Palmaz Vineyards in Napa, California where winemaking and aging take place within the living rock of Mount George, in a maze of tunnels and lofty domes. Vista Systems’ Spyder plays a key role in the advanced technology Palmaz uses to aid winemakers in creating complex, elegant, super premium wine.

Palmaz Vineyards has reinvented winemaking on the site of the Cedar Knoll Vineyard and Winery, founded in 1881 by Henry Hagen, one of the Napa Valley’s pioneer winemakers. The Palmaz family bought the forgotten stone winery and introduced true gravity-flow winemaking in a wine cave equivalent to an 18-story building. Gravity-flow winemaking eliminates the violent agitation of pumping, which can change the wine’s intra-molecular structure. Instead, the gentle treatment allows the finest nuances of flavor to develop naturally.

“What makes a winemaker great has little to do with the ability to ferment wine and everything to do with the seemingly inhuman ability to sense the subtleties in wine,” said Christian Gastón Palmaz, president of Palmaz Vineyards. “The only instrument we want them to have in hand is a glass. Up to 50 percent of their time is spent determining how far along they are in fermentation. The more tanks you have the less often you check and make critical adjustments and decisions.”

Palmaz partnered with Acrolon Technologies and aerospace metal fabricator Rodney Smith to create the first fully algorithm-based fermentation control system, featuring proprietary intelligent instrumentation in each tank, which monitors more than 10 million points of temperature inside the tank space, providing the winemaker a live visual thermal representation of the tank. “With this powerful information they can better steer the artistic ship—and make great things happen to the color, texture, flavor and aroma of the wine,” said Palmaz.

To gain a full understanding of the state of each tank, however, the winemakers need to constantly review the tank data. “How could we put the data in front of them?” asks Palmaz. “An iPad accompanies the process but referencing 30 days worth of data across 36 fermenters on a 9.7-inch screen can be cumbersome. Positioning the data so that critical information could be observed without having to search for it became the goal.”

Palmaz envisioned a projection system. After all, he had the huge curved surface of the dome available. “But we had been told for years that edge blending wouldn’t work in that space,” he said. “Even the best planetarium consultants in the world discouraged us from projection.”

The Palmaz family introduced true gravity-flow winemaking in a wine cave equivalent to an 18-story building. Twenty-four fermentation tanks rotate on a massive custom-designed carousel. An algorithm-based fermentation control system monitors more than 10 million points of temperature inside the tank space, providing the winemaker a live visual thermal representation of the tank.

Then he heard about two products that looked likely to make his dream a reality. “Christie’s HD14K-M projectors have geometric correction at an unbelievable level and focal depth lengths never seen before. And Vista Systems’ Spyder X20 1608 could create a pixel cloud of unparalleled size. With those products we’d be headed down the right path.”

But Palmaz notes that he’s “a vintner, not an AV specialist.” So he hired commercial integration firm CCS Presentation Systems, whose San Jose office undertook months of “rigorous testing and custom work” with Christie and Vista to devise a very unique system for the Palmaz Vineyards’ dome. “And the end result is unbelievable,” Palmaz said. “They took a space inhospitable to projection and delivered projection with extreme high definition, clarity and brightness.”

“The space itself has a big ‘wow’ factor,” said Adam Bahri, senior account executive at CCS. “The AV system now enhances that. You turn it on and the projections deliver an extra ‘wow.’ Changing winemaking through technology—it’s a unique approach.”

The projections give winemakers a graphical representation of control screens showing the thermal state of the tank. That enables them to “focus on fermentation in exquisite detail,” said Palmaz. “During harvest, it’s like watching a live movie—the fermentation is active.”

But the system is also designed to take winemakers back through a previous vintage. “You can play back an entire harvest with the tap of a button,” he explains. “There’s an animation of the property then day-by-day sequences showing which vineyards were picked and their fermentation. You can see 240 hours of fermentation in seconds—for all 24 tanks. It’s so visually stimulating. And it helps make an important point of how complex fermentation is.”

Edy Salomon, technical operations manager for CCS, said the first challenge faced by CCS was “edge blending six projectors, which is difficult to do. Then edge blending them on a domed ceiling was pretty much unheard of.” Christie did a site survey to determine the number of projectors required, their angles and distances ultimately opting for six projectors custom-mounted on the second floor with the rotating carousel below.

Spyder was selected for its ability to “stretch a single image over multiple projectors,” Bahri explained.

Palmaz wrote a simple custom app for Apple iPhone or iPad that allows the winemaker to trigger projections sourced by a Mac Pro tower running ~sedna Presenter and fed to the six Christie projectors, which perform the warping for the dome, and the Spyder, which handles the edge blending.