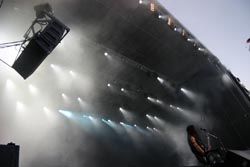 "Thunder's used MILO on a number major tours, so we know we can expect loud, clean sound from MILO for every performance anywhere in the world," says Thunder Audio vice president Paul Owen, also the band's monitor engineer. "The sound has to be consistent from night to night, and we have complete confidence that every Meyer loudspeaker we use will be consistent and that Meyer's technical support will back us up."

Metallica has used Meyer Sound equipment in the past including during their 2006 "Escape from the Studio Tour" dates in Estonia and Holland. Earlier this year the band upgraded their Northern California rehearsal studio with Meyer Sound M'elodie ultracompact high-power curvilinear array loudspeakers and a 600-HP compact high-power subwoofer, and replaced their old monitors with new MJF-212A monitors, which also are being used on tour in Europe.

Of the stage monitor, Hetfield has said: "The MJF-212A stage monitors are able to cut through and still sound full. I can hear and feel my voice above the wall of 'Tallica," he says. "For some reason we like it loud!"

The tour includes stops in the UK, Spain, Sweden, Norway, and lands in Moscow, Russia's historic Luzhniki Stadium for the final show on July 18, where Metallica will play for an anticipated audience of more than 75,000.