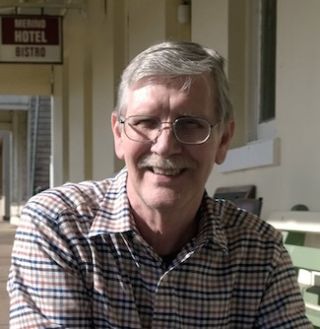 Bob Sharp has always seen the big picture as an amalgam of many tiny pictures. His career began in an era when large-scale presentations were delivered by “giant banks of Kodak Ektagraphic slide projectors clattering away,” all locked in sync, with every slide pin-registered so it fell into a precise place in a moving grid of imagery. Today, the most impressive pictures are delivered as pixels pushed across mega-bandwidth pipes. But it’s still all about getting the right image element into the right place at the right time.

Sure, the technology has changed, but it’s what has remained constant within Sharp that has defined him as one of the industry’s most authentically enthusiastic proponents. He’s always been a photographer, started out as a pro in England, in fact, before he moved to the U.S. in 1983 to work for one of only four slide animation camera manufacturers operating worldwide.

From that move springs evidence of his other steadfast qualities: he’s a specialist working to proliferate precision for the best in the biz. After slide cameras gave way to digital technology, an arc through computer graphics card manufacturing carried Sharp from slide projection to his current post as director of international sales for SVSi, which was acquired by Harman last June and is now a part of the AMX division there.

One of the greatest ironies of this particular career trajectory, the good-natured Sharp chuckled, is that people talk about the way that SVSi harnessed the power of this new thing called IP, when in fact Internet Protocol is as old as those banks of slide projectors. “It was invented in 1975, and IP has been fully backward compatible for 40 years,” Sharp observed. “In 1975, we were doing slide projector shows, and yet an IP address in 1975 was the same as it is in 2015. The technology has gotten better, faster, cheaper, but it has never been supplanted by something different, and that’s obviously why IP is this universal worldwide standard for moving data around.”

When SVSi burst onto the AV scene eight years ago with a switcher that worked over the network, IP’s potential was just beginning to dazzle, with minds being blown by 1 Gigabit bandwidth. Now, with 40 Gigabit and 100 Gigabit networks hovering just over the horizon, it looks very much as though Sharp is once again at the forefront of the big-picture-making.

Modestly, he credits the image delivery with the real power. As it has always been in the audiovisual industry, it’s all about the in-person demo, he said. From his earliest days with SVSi, you could talk IP potential all you want, but more importantly, it was about showing what the technology could do. “We stayed the course because we knew from customer reactions that this was something with real potential. We knew because we never, ever did a bad demo. Every demo we ever walked away from, the people said, ‘Wow, can you really do that on a network switch?’ That gave us the encouragement to say that if you keep on pushing away at it, people will catch on.”