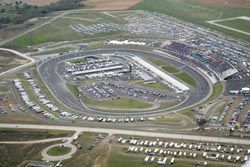 The main audio system at the new Iowa Speedway is comprised of 36 Community R.5-HP loudspeakers mounted on the wheel fence. ?
"Rusty had very high standards going in," said Josh Thompson, senior consultant at Atlanta-based Polysonics, the company behind the Speedway's audio, video, and data infrastructures. "He wanted to offer the best racing surface, the best fan experience, and the most technically advanced racing facility in America." Wallace brought in racetrack veteran Andy Vertrees as the venue's chief operating officer.

"We take a lot of pride in what we do," Vertrees explained. "We've done so many out-of-the-box things here, from embedding cameras in the track to putting Geofoam blocks over the tunnel so the track doesn't freeze and thaw. One of the most important things for me was a sound system that really worked, with dependable coverage both inside and outside the venue. I hired Josh and Polysonics to bring me that system."

"Andy phoned to talk about the PA system, and it became clear immediately that Polysonics could bring a whole lot more to the table," Thompson recalled. Polysonics ultimately handled the Speedway's data, phone and broadcast infrastructures as well. "It's the only track in the US that's 100 percent fiber optics, point to point, for telephone and data traffic," Thompson observed.

The main audio system is comprised of 36 Community R.5-HP loudspeakers mounted on the wheel fence. "For an application like this, covering seating that is better measured in acres than in rows, the R.5-HP is really the only choice," said Thompson. "It's a weather-proof, camera-friendly package with minimal impact on sightlines that can deliver full-range, extremely high SPL audio. Nothing else we have found even comes close."

The rest of the Speedway's sound system is also Community, with Cloud4 ceiling speakers covering the indoor lounge areas, while I/O5 and additional R-Series speakers are placed behind the seating and in parking areas. "We specified Community loudspeakers throughout the entire Speedway project for several reasons," Thompson explained. "Beyond the economies of scale, competitive pricing, and simplified project management tasks, Community has a diverse enough product line to meet every application, from the 118dB wheel-fence system, to the significantly quieter suites and offices. Even more importantly, Community has proven to be an excellent partner, both in terms of the breadth of their product line and their unparalleled support."

The system is powered by Crown iTech amplification, which also handles much of the system-critical signal processing. "One of the key mandates from Andy was that they didn't want an engineer to have to come out and mix every event," said Thompson. "We've implemented critical DSP-delay, compression, EQ, speaker protection-via the Crown iT-8000. That allowed us to lock those system-level functions and make the operation fairly idiot-proof."

As Thompson points out, the project's biggest challenge was the highly compressed time frame, going from cornfield to speedway in just under 18 months. "Everything associated with racing is fast," he stated. "It's inherent in the mentality of the entire team. From their perspective, they can tear a car apart, rebuild it and run it around the track in 15 minutes, and everyone else needs to keep up. There's a tremendous level of complexity in a speedway project, and you've got to be on your game."

The time frame was probably the biggest challenge," agreed Ward Jorgenson of Communications Engineering Corporation. Des Moines-based CEC was contracted for installation of the audio, CCTV, and broadcast fiber optics. "That, and the fact that everyone else was on an equally tight schedule. All the trades were working at the same time, which meant everyone had to coordinate their phase of any given area, and work around everyone else. Our guys averaged between 70 and 90 hours per week."