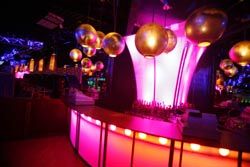 Eight Turbosound Aspect TA-500 wide dispersion loudspeakers and eight TSW-218 subwoofers handle the 40-foot by 60-foot dance floor at the new Bliss Lounge in Clifton, NJ with pinpoint accuracy.
Formerly known as "Joey's Night Club," Bliss was completely renovated before reopening, with design by Pedro Pons and lighting by Dougie Lazer. As described by Joe Lodi, owner and chief designer of Advanced Audio Technology, the old sound system consisted of "a large number of primitive boxes, each the size of a refrigerator and with the sound quality of an AM radio." Lodi and his partner and head of installation, Angelo Poulos, designed and installed the new, justifiably-hyped sound system, which hinges on eight TA-500 and eight TSW-218 Turbosound Aspect Series loudspeakers and subwoofers.

"We chose to install the Turbosound Aspect TA-500s and TSW-218s based on the owner's description of the very high-end talent that would be playing at Bliss and his overall business plan," explained Lodi. "The system that we designed could have done a club twice the size of Bliss, but we believe strongly in having ample headroom for any situation. More so than any other loudspeaker that I have ever auditioned, the Aspect Series speakers hold together and sound amazing at high volumes. The owner wanted the very best of the best-a no-compromise system-so that's what we gave him."

"With the pinpoint accuracy of the TA-500s, we were able to focus the energy on the dance floor and minimize spillover to adjacent areas," Lodi explained. "What's really cool about the Aspect Series speakers is that you don't lose any frequencies off-axis. So when you're not on the dance floor, the music still sounds just as good, just not as loud."

Lodi positioned the dual 18-inch horn-loaded Turbosound TSW-218 subwoofers in blocks of four adjacent to the dance floor and powered them with two Crest 9001 4100-watt and two MC2 E45 4500-watt amplifiers. "Standing in front of them is positively rattling," he laughed. "The Turbosound TSW-218 is, in my opinion, the most accurate, powerful, and warm sounding sub that I have ever heard at any price. We could have gone with something else, but to achieve the same volume and clarity, we would have had to take up way more floor space with way more boxes. And aside from all that, I'm not convinced that anything else would have the warmth of a TSW-218."

Ironically, the old sound system's lack of punch hid the building's architectural failing, which revealed itself when Bliss started working the subwoofers on 140-peak dB nights. A residence literally five blocks away reported hearing the deep heartbeat of a Bliss dance night, and the club is currently in the process of building a suspended, decoupled ceiling and a double front wall with a door vestibule.

"Believe it or not, you can't sleep on Jersey," Lodi mused. "They stay up on their clubs. The system at Bliss blows away every other club in Jersey, no question, and it's right up there with the very best systems in New York. That's testified by the big DJ's that have played there in the few weeks that Bliss has been open, including Jonathan Peters, who DJ Times claimed is the best DJ in America, and Victor Calderone, who is well known for his collaborations with Sting and Madonna, among many others. I can't remember the last time a club sound system had so much hype! It's crazy in there."